Breaking Benjamin frontman Ben Burnley has been selling out electric and acoustic shows all over the country, particularly in Northeastern Pennsylvania, so expect a packed store on Friday, June 26 when the singer/songwriter appears for a record release signing at the Gallery of Sound in Wilkes-Barre. This will be his first meet and greet in […]

Breaking Benjamin premiered “Failure,” their first new single since reforming, back in March, and now the Wilkes-Barre rockers have released a lyric video for the song featuring some grim imagery of graves and what lies beneath them, though the overall message is certainly positive. Those who pre-order the new album, “Dark Before Dawn,” on iTunes […]

From a press release: A Beautiful Disaster, the brand new band featuring world-renowned guitarist Mike Orlando of Adrenaline Mob, multi-platinum-selling drummer Chad Szeliga of Breaking Benjamin and Black Label Society, and critically acclaimed vocalist Nick Coyle of Lifer and The Drama Club, was formed in late 2014 and already has some major buzz going thanks […]

As promised, Breaking Benjamin have released their new single this morning, “Failure,” their first new track since going on hiatus, along with further details about their upcoming full-length album. The Wilkes-Barre-based rock band’s last album of original material, “Dear Agony,” was released in 2009, so fans have eagerly anticipated new music, and from the sound […]

After posting a teaser video on March 12 with only “3/23/15” to hint at some type of release, Breaking Benjamin has revealed that the new single “Failure” will arrive on that date, as well as a new album called “Dark Before Dawn” on June 23. View the teaser below: Post by Breaking Benjamin. The Wilkes-Barre […]

Breaking Benjamin has really been taking care of their hometown fans since they reformed and played two sold-out comeback shows last September, following that up with an unplugged tour that stopped at the Sherman Theater. Now, before the full band hits the road again and travels across the country in April, Wilkes-Barre’s own Benjamin Burnley […] 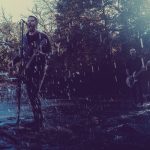