From a press release: On Saturday, July 30, one of the area’s most loved performers, Wade Preston, Billy Joel’s backup, returns for two shows in one night by Harmony Presents in the underground theater of the the Hawley Silk Mill. “It’s not often a man can sit in front of a piano and command full […]

From a press release: The Scranton Cultural Center at the Masonic Temple will host a celebration of music and the arts when it presents “Some Enchanted Evening,” a concert featuring audience favorites from Broadway to the Met, on Saturday, Nov. 15. The concert will be preceded by the “Life. Celebrated.” reception. This event, hosted by […] 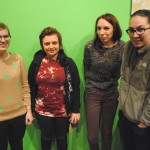 The fun, excitement, and uncertainty of throwing a Pity Party in Scranton