From a press release: It was announced today that platinum-selling country music artist Gary Allan will be performing at Penn’s Peak in Jim Thorpe on Sunday, Oct. 16 at 8 p.m. Tickets, which are $50 for reserved seats or $55 for the pit, go on sale next Friday, July 8 at 10 a.m. at all […]

From a press release: It was announced today that new hit country music singer/songwriter Chris Janson will perform at Penn’s Peak in Jim Thorpe on Saturday, Dec. 17 at 8 p.m. Tickets, which are $29 in advance or $34 the day of the show, go on sale next Friday, July 1 at 10 a.m. at […]

From a press release: The three-time Grammy Award winners and multi-platinum artists in the Zac Brown Band are embarking on their sixth headlining tour of the United States, “Black Out the Sun,” which stops at Hersheypark Stadium on Saturday, July 23 at 7 p.m. Special guests for the evening will be Drake White & The […]

From a press release: The second leg of country star Luke Bryan‘s “Kill the Lights Tour” has been announced, which includes a stop at The Pavilion at Montage Mountain in Scranton on Thursday, July 21 at 7:30 p.m. Little Big Town and Dustin Lynch will be opening the show. Tickets go on sale Friday, Feb. […]

From a press release: You may know Aaron Lewis as the unpretentious and introspective frontman at the heart of Staind’s unique sound. With 13 million albums sold worldwide and four consecutive top three debuts on Billboard’s Top 200, their single “It’s Been Awhile” remains the most-played rock song of the decade. In 2011, Lewis formally […] 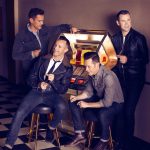