From a press release: Meat and Potato Entertainment and Thirst T’s Bar & Grill have teamed up to bring “BowieLive” to Olyphant on Thursday, April 19 at 7:30 p.m. The David Bowie tribute concert has been added as a compliment to the current year-long tribute series the pair is producing, which was announced last year […]

From a press release: Classic Albums Live takes on the iconic David Bowie, performing “The Rise and Fall of Ziggy Stardust and the Spiders from Mars” – note for note, cut for cut, live on stage. Using the world’s best musicians, fans will be treated to an exact replication of the album, followed by a […]

Just two days following his 69th birthday, David Bowie passed away on Sunday, Jan. 10 after battling cancer over the last 18 months. It has been almost 12 years since the Thin White Duke graced Northeastern Pennsylvania with his awe-inspiring presence, but judging by the local reactions on social media to his untimely death, he […] 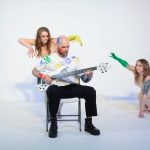