Joey Belladonna, the vocalist of Anthrax, one of the legendary Big Four thrash bands, will return to Scranton with his cover band, Chief Big Way, for a show at Finnegan’s Irish Rock Club on Saturday, July 20 at 7 p.m. Local bands Rockstar Revolution and the Jay Orrell Band will open the 21+ concert. Belladonna’s […]

From a press release: It was announced this week that Chicago punk/metal band First Jason, fronted by singer and actor Ari Lehman, who played the role of young Jason Voorhees in the classic 1980 horror film “Friday the 13th,” will terrorize Scranton with a performance at Finnegan’s Irish Rock Club on Thursday, May 9 at […]

The last time vocalist Joey Belladonna was in Scranton, he was performing with Anthrax at the 2012 Rockstar Energy Drink Mayhem Festival at The Pavilion at Montage Mountain. On Sunday, Aug. 20, he played to a much more intimate crowd at the Irish Wolf Pub in downtown Scranton, but with just as much energy. In […] 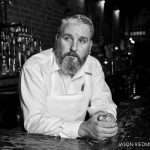