From a press release: Today, the F.M. Kirby Center for the Performing Arts announced an online photo auction of prints taken by local photographers and shot at the historic downtown Wilkes-Barre venue. The auction will take place on the Kirby Center Facebook page on Tuesday, June 30 at 10 a.m. through Thursday, July 2 at […]

From a press release: With the world in a current state of lockdown, quarantine, and uncertainty due to COVID-19, positivity seems to be in short supply. And in the wake of the virus’ stranglehold on day-to-day activities as well as the global economy, music venues have closed, concerts have been canceled, and tours are postponed […]

From a press release: The F.M. Kirby Center for the Performing Arts in Wilkes-Barre will be holding their second annual F.M. Kirby Fest: A Night of Pints, Pinot & Performing Arts on Saturday, April 21, 2018 from 5 p.m. until 9 p.m. In 2017, more than 20 various wineries, breweries, and restaurants handed out samples […] 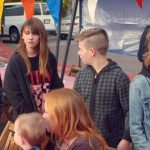