After the major success of last year, the ScrantonMade Holiday Market returned for the second year to the old Globe Store in downtown Scranton, turning what is now the Lackawanna County Government Center into a nostalgic trip down memory lane for those who remember the holiday rush of department store shopping on Friday, Dec. 1 […]

From a press release: Irish traditions and folklore are steeped in the fabric of Lackawanna County. To celebrate this vibrant part of our community, the Lackawanna County Commissioners Patrick O’Malley, Jerry Notarianni, and Laureen Cummings are sponsoring a unique exhibit and panel honoring Irish culture. “The Face of Irish Music: Photographs by Robin Hiteshew” opens […]

Wyoming Avenue in downtown Scranton was flooded with hundreds of people, but it wasn’t the St. Patrick’s Parade. On Friday, Dec. 2, just after 5 p.m., the huge structure that once housed The Globe Store was lit up again with bright Christmas lights and decorated front windows, just like it was in the defunct department […]

While practically everyone in Northeastern Pennsylvania is excited to see the old Globe Store in downtown Scranton lit up and open to shoppers again this weekend, it’s much more important to support the stores that are actually open and active year-round that will be participating in ScrantonMade’s fourth annual Holiday Market in The Globe Dec. […]

From a press release: The holiday season is officially upon us. The hustle and bustle of shopping, community events, elaborate decorations, and family gatherings all add to the aura this time of year. These activities are timeless in their meaning and significance. A fond memory of days gone by will be rekindled and shine brightly […] 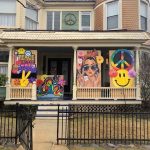