From a press release: Seven-time Emmy Award-winning sports host, interviewer, narrator, writer, and producer Roy Firestone will visit the F.M. Kirby Center in Wilkes-Barre on Friday, Oct. 20 at 8 p.m. Tickets, which are $27.50 and $55, plus fees, are on sale now and available at the Kirby Center box office (71 Public Square, Wilkes-Barre), […]

From a press release: Michel Martin, weekend host of “All Things Considered” on NPR, will be at The Royal Theater at the University of Scranton’s McDade Center for Literary and Performing Arts on Tuesday, June 6 at 7 p.m. to host the final installment of NPR’s “Going There” live event series – “Civics 101: What […] 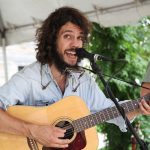