Wilkes University continues its Summer Reads book giveaway this week by offering a chance to win a copy of Brian Fanelli’s 80-page poetry collection “All That Remains,” published last fall by Unbound Content. To enter, follow this link and comment on an excerpt from the book. The contest for this book ends this Friday, Aug. […] 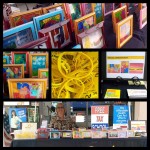 What does the future look like to those with intellectual, developmental disabilities?
Jerry Springer hosting ‘The Price Is Right Live!’ at the Kirby Center in Wilkes-Barre on Oct. 22
WWE brings Smackdown back to Wilkes-Barre