From a press release: Today, Scranton/Philadelphia punk band The Menzingers unveiled a new track from their forthcoming album, “Hello Exile,” that releases some pent-up frustration with the state of our union. “America (You’re Freaking Me Out)” starts the new record off with restless urgency; it’s pounding rhythms and furious guitar riffs provide a much-needed release […]

Scranton folk punk band Old Charades has been fairly quiet this year, save for a handful of shows in their hometown and Philadelphia, but that is changing today as they premiere a brand new song, “Last Days of the Wild Ones,” exclusively on NEPA Scene. The trio wrote and later recorded a few tracks in […]

Known locally for bands like And The Moneynotes, The Minor White, and most recently Heavy Blonde, Scranton musician Roy Williams has been living in New York City playing in various groups and just released his solo album of original compositions, “Throwing Punches,” in February. Another project of his, Roy Williams and the Human Hands, also […] 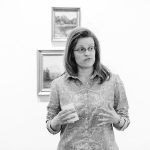