After opening for Flaw in Duncannon near Harrisburg last week, Behind the Grey made some big announcements this week about the future of the Scranton metal band. On their Facebook page, the band revealed that they just signed an exclusive management deal with Damon Moreno and Bruce Swink (former A&R at Roadrunner Records) of the […]

From a press release: Last in Line, a heavy metal band formed by the original core lineup of Dio’s 1984 album “The Last in Line,” will perform at the Sherman Theater in Stroudsburg on Saturday, April 1 at 8 p.m. Tickets, which are $23 in advance or $27 the day of the show, are on […]

From a press release: After playing Wilkes-Barre back in 2015, Michigan metalcore band I Prevail will return to Northeastern Pennsylvania to kick off their national headlining tour in support of their debut full-length album, “Lifelines,” at the Sherman Theater in Stroudsburg on Sunday, Feb. 12 at 8 p.m. with special guests Wage War, Islander, and […]

YOU SHOULD BE LISTENING TO: Scranton groove metal band Threatpoint

Threatpoint City: Scranton Genre(s): Metal, heavy metal, hard rock Years active: 2012-present Sounds like: From day one, Threatpoint has defined themselves as “Electric City groove metal,” and they’ve lived up to that label ever since, whipping up mosh pits across the country with aggressive vocals, frantic riffs, pounding drums, and hooks that sink into your […]

Beyond Fallen City: Wilkes-Barre Genre(s): Metal, heavy metal, hard rock Years active: 2003-present Sounds like: If you wish more modern bands had the same epic feel of the classic metal rockers you grew up with, Beyond Fallen creates badass, mosh-ready music just for you. Sounding more like they came from Europe than Wilkes-Barre, their rebellious, […] 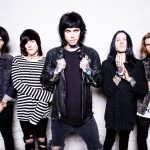