Chloé Zhao has made history at the 93rd Academy Awards as the first Asian-American woman and first woman of color to win Best Director. She won for “Nomadland,” which Zhao also edited, produced, and adapted as a screenplay (from the book by Jessica Bruder). Only one other woman has ever won Best Director: Kathryn Bigelow […]

The Academy Awards are here! OK, so I’m probably one of the few people that get a little too excited around award season. While everyone else was preparing themselves for the big game, I was counting down the days until the reigning award show returns. Don’t get me wrong – I enjoyed Left Shark just […] 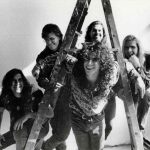