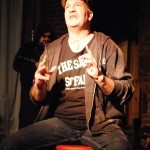 Auditions for K.K. Gordon’s ‘Short Works by the Big Guy’ to be held Jan. 18 in Scranton