As the proud media sponsor of the 2015 NEPA Metal Meltdown festival, NEPA Scene is thrilled to announce the official lineup for the second annual event. Organized by Beyond Fallen vocalist Joe Karavis and guitarist Steve Jasuilewicz, the local festival created by metal bands for metal bands and their fans will return to Diane’s Deli […] 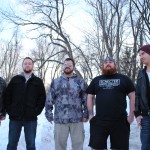