ustin Douglas exudes classic rock ‘n’ roll cool. It’s in his denim jacket, black leather boots, low-hanging necklaces, slick hair, 5 o’clock shadow, and devil-may-care swagger as he strolls in and sits back for an interview. The explanation is simple. “When my mom was pregnant with me, my dad would hold up headphones to her […] 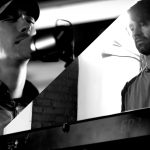