Every week of NEPA Scene’s Got Talent, our free open mic and talent competition at Thirst T’s Bar & Grill in Olyphant, we feature a quick Q&A with the latest audience vote winner, which was Plymouth percussionist and drummer Fred Emmett on Oct. 20. The weekly winner receives $50 in cash, courtesy of Fireball Cinnamon […]

Drummer Fred Emmett brought a big sound to the small stage at Thirst T’s Bar & Grill in Olyphant for a second time on Tuesday, Oct. 20 and took home the audience vote at NEPA Scene’s Got Talent. Playing several different types of drums, along with pots, pans, and buckets that kicked up a cloud […]

Wyoming Valley West Senior High School in Plymouth held its annual Holiday Band Concert on Sunday, Dec. 14, so with it being Christmas Eve, NEPA Scene photographer Tammy Heid felt it was the perfect time to share some photos from the event. Under the direction of Andrew Kolojejchick, the band performed “Carol of the Bells,” […] 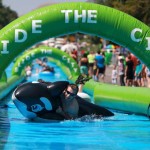