As a finalist in NEPA Scene’s Got Talent and a fresh young voice in the Northeastern Pennsylvania music scene, Adam Bailey has seemingly come out of nowhere and established a name for himself rather quickly with his original compositions and a unique cover of an old American folk song. While performing “Wayfaring Stranger” live, the […]

July is here, so it’s time to lie out in the sun, drink an ice-cold beverage, and relax with some good old-fashioned Americana music. There’s a lot of talk now about summer anthems, but “Ragweed Summer” by singer/songwriter Tony Halchak, exclusively premiering here on NEPA Scene, actually captures the feel of a warm summer day, […]

In the music business, the biggest emphasis always seems to be on singers and guitarists, but Grant Williams is proving that bassists deserve the spotlight as well. The 27-year-old Scranton native has been playing bass for about nine years, most famously in local grunge rock band Graces Downfall, and he started composing his own solo […]

SONG PREMIERE: ‘I Need a Woman’ by Ed Randazzo and Bret Alexander

Blues singer/songwriter Ed Randazzo just finished recording his latest album this month, and while it’s not due out until the fall, he couldn’t wait to share the first single. We were happy to oblige by premiering “I Need a Woman” right here on nepascene.com. The 36-year-old Wyoming resident has been writing and recording a mix […]

Since the beginning of 2015, Scranton hard rock band Silhouette Lies has been locked in the studio working tirelessly on their debut full-length album. Now NEPA Scene gets to unleash the exclusive premiere of the first haunting single from that album, “The Scarecrow Walks at Midnight.” “Lyrically, the song is about a serial killer and […]

NEPA Scene launched to the public in September of 2014 and has since grown into the area’s leading independent arts and entertainment website, winning awards and gaining a loyal following earned through perseverance and positive word of mouth. Founder and editor Rich Howells started the site on his own after he was laid off from […]

From cheesy t-shirts to “The Walking Dead” to first-person shooter video games to cheap Halloween costumes, zombies are everywhere nowadays, so much so that even some lifelong horror movie fans like Bobby Keller are wishing these corpses would just stay buried. His latest short film, “My Zombie Flick,” shows exactly why this trend should expire, […] 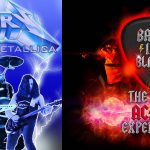 Metallica and AC/DC tributes Battery and Back in Black play Kirby Center in Wilkes-Barre on Dec. 1 and Jan. 19