A week after NEPA Scene premiered three trippy music videos that gave local music fans an early listen to the band, Jordan Ramirez & the Tribe made their headlining debut at the River Street Jazz Cafe in Plains on Saturday, Aug. 4 with their friends Doghouse Charlie. Known for his soulful voice and funky guitar […]

While the world was mourning the death of legendary Pantera drummer and co-founder Vinnie Paul on Friday, June 22, Northeastern Pennsylvania was also reeling from the loss of Tommy Wynder, a beloved and respected drummer in his own right, that same night. Born in Pittston, the Exeter musician who graduated from Pittston Area High School […]

From a press release: One of the original third-wave ska bands, The Toasters, will headline a night of ska punk music at the River Street Jazz Cafe in Plains on Saturday, June 16 with The Ladrones, Sgt. Scagnetti, Disposable, and Bunchajerks. The Toasters last played in Luzerne County at the F.M. Kirby Center in Wilkes-Barre […] 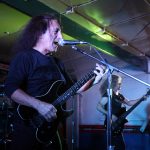