In these turbulent times, the world is ready for a band with a sound as chaotic as Toothless. While other musicians put their plans on hold, the Wilkes-Barre metalcore/mathcore group purposely released their new EP on May 5 to give people stuck at home something to listen to during the coronavirus pandemic – and to […]

From a press release: Following a Halloween Extravaganza last month, the Par Glass House in Shickshinny will be hosting a Holiday Show with punk and folk music on Saturday, Dec. 10. Doors are at 6 p.m., and the show begins at 7 p.m. There is no set fee to enter, just a pay-what-you-want donation. Bands […]

From a press release: The Par Glass House in Shickshinny, home to the biggest and best house shows in Northeastern Pennsylvania, will be hosting a Halloween Extravaganza with a diverse lineup of local bands on Friday, Oct. 21. Doors are at 6 p.m., and the show begins at 7 p.m. Costumes are encouraged, and there […]

52 acts performing over two days for free in an open field in the middle of nowhere. Yes, it was as crazy and awesome as it sounds. Yardstock continues to grow each and every year, and the third annual independent music festival was bigger and better than ever with music kicking off at 2 p.m. […]

STREAMING: Listen to tracks from every Yardstock 2015 band, Day 2

Yardstock, the annual free independent music festival at 740 Ridge Road in Shickshinny, has grown exponentially every year, boasting a whopping 52 acts of various genres in its third outing. Presented by West Bound Sound/Par Glass House Shows and the Time Table Records Collective, Yardstock III has so many great bands to see on Friday, […] 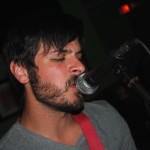