From a press release: Rock bands Saving Abel and Tantric are hitting the road together in 2019, stopping at Stage West in Scranton on Thursday, March 7 at 7 p.m. Scranton hard rock and metal bands Graces Downfall, Behind the Grey, and The Holtzmann Effect will open the 21+ concert. Tickets, which are $22 in […]

From a press release: It was announced today that Pittsburgh punk rock band Anti-Flag, known for their political songs and regular appearances on the Vans Warped Tour, will perform at Stage West in Scranton on Thursday, Jan. 17. Fellow Pittsburgh punks Swiss Army will open the show, along with Exeter heavy metal band Royal Hell […]

With “Fantastic Beasts: The Crimes of Grindelwald” in theaters now and Harry Potter fandom still going strong 21 years after the character’s literary debut (spawning new events like Wizardfest), Scranton progressive/alternative rock band Eye on Attraction is digging up a nearly 20-minute “wizard rock” song they wrote years ago and playing it live in its […]

From a press release: With Rusted Root currently on hiatus, the frontman of the multi-platinum Pittsburgh jam band, Michael Glabicki, has been performing as a duo with Rusted Root’s longtime guitar player and backing vocalist Dirk Miller. It was announced today that the pair will be playing at the new Scranton music venue Stage West […]

From a press release: Wizards, witches, sorcerers, and the half-blood prince will need to make a special trip to Diagon Alley for a fresh pair of dress robes because Wizardfest is flying into West Scranton. The touring Harry Potter-themed dance party will transform the new music venue Stage West (301 N. Main Ave., Scranton) into […]

From a press release: New York comedian Joe Matarese, seen on “America’s Got Talent,” Comedy Central, the “Late Show with David Letterman,” and more, will return to Northeastern Pennsylvania to headline the first Hump Day Comedy & Dinner night at the new Scranton venue Stage West on Wednesday, Oct. 17 at 7 p.m. There will […] 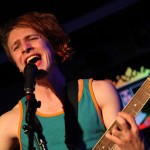