From a press release: Ryan Kenton is climbing up the ladder to success alongside New York City singer/songwriter Delsa with their new hit single “Everytime,” released on Tuesday, July 25 on Apple Music, Spotify, and Google Play. With big plans and a big personality to match, Kenton is making his way from small town DJ […]

Last week during the live recording of Episode 17 of the NEPA Scene Podcast at Coal Creative’s production studio in downtown Wilkes-Barre, local rock band Vine Street opened and closed the show with stripped down acoustic versions of two of their original songs – “Mad Mad Woman” and “XOXO.” They can be watched on YouTube […]

To open Episode 16 of the NEPA Scene Podcast, Olyphant drummer Chris Langan offered to show off his skills a bit with an improvised drumming demonstration to set up our conversation about his work. Langan is the drummer for LondonForce, Dani-elle, Grant Williams, Tribes, and other local bands as well as a drum teacher and […]

Progressive metal band Tool surprised many longtime fans on the second stop of their 2017 U.S. tour at the Giant Center in Hershey on Thursday, May 25 by performing “Eulogy,” a song from their influential 1996 album “Ænima” that they haven’t played live since 2001. Frontman Maynard James Keenan, who also sings in A Perfect […]

Last week during the live recording of Episode 8 of the newly relaunched NEPA Scene Podcast at Coal Creative’s production studio in downtown Wilkes-Barre, singer, songwriter, and mandolinist JP Biondo, who is both a solo artist and a member of Scranton/Wilkes-Barre jamgrass band Cabinet, opened and closed the show with stripped down acoustic versions of […]

Last month, Scranton indie rock band Tigers Jaw gave fans their first glimpse of “Spin,” their upcoming album and first for new label Black Cement Records. Revealing the cover art, tracklist, and a behind-the-scenes music video for the first single, “Guardian,” the record is set to come out on Friday, May 19, so with about […]

Last week during the live recording of Episode 2 of the newly relaunched NEPA Scene Podcast at Coal Creative’s production studio in downtown Wilkes-Barre, Scranton singer, songwriter, and guitarist Edward Cuozzo opened and closed the show with stripped down acoustic versions of two songs from “On/Off: Reset,” the debut album by his new alternative rock […]

Last year, NEPA Scene premiered the debut music video of Alma Mater, and now the alternative rock band has checked back in with us after releasing their first EP, “Cloud Cover,” last week, a personal collection of songs by the Wilkes-Barre trio. “Each song is most generally about personal experiences, so inspiration came from emotions […]

It has been almost a year since we last heard from Eye on Attraction, but the Scranton progressive/alternative rockers certainly made it worth the wait. After parting ways with their second vocalist last year following a successful tour with Las Vegas hard rock band Adelitas Way, EoA laid low but never stopped working on new […] 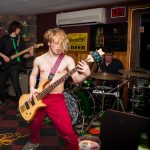