In the late stages of his career, it seems that everybody who’s anybody wants to play with Bob Weir. This is an interesting place for a man who made his career as rock ‘n’ roll’s most famous second fiddle. From the “Bobby Fans. Weir People Too” bumper sticker seen on Shakedown Street to the 2014 […]

Indie rockers Dr. Dog brought their Psychedelic Swamp Tour home to Philadelphia’s Fillmore on Saturday, April 16, taking the stage to an 8-bit version of their current single “Badvertise” before opening with an eerie execution of “The Beach” from their 2008 album “Fate.” Things took off from there as the band delivered rollicking renditions of […] 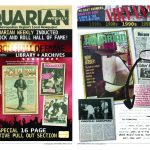