From a press release: Locals who have driven on Adams Avenue in downtown Scranton over the past week may have noticed a new mural on the side of The Leonard Theater building. With bright typography that reads “Human, After All” and imagery of poplar leaves and flowers, the social justice artwork was completed on Sunday, […]

With four frightening horror attractions spread over 65 acres in Scranton, delivering 90 minutes of terrifying entertainment to thousands of people, the cost to run and maintain Reaper’s Revenge Haunted Attraction, dubbed “America’s best haunted attraction,” every fall must be pretty high. To raise funds for the attraction’s talented makeup team, whose work seems to […]

From a press release: It was announced today exclusively through NEPA Scene that platinum-selling alternative rock band Saliva will take their Live and Unplugged Tour to The Leonard Theater in downtown Scranton on Friday, April 14 at 7 p.m. The event at The Leonard (335 Adams Ave., Scranton) is 18+ and 21+ to drink. Tickets, […]

As NEPA Scene reported back in December, New Jersey-based Bruce Springsteen tribute act The B Street Band is set to perform at The Leonard Theater in downtown Scranton on Friday, Feb. 17 at 9 p.m. Since that time, however, the cover band that has opened for the Boss himself has become the center of controversy […]

From a press release: ARK Helps, a nonprofit organization owned and organized by a 14-year-old girl from Scranton, has scheduled another benefit concert to help a local family. “ARK-Fest” will be held at The Leonard Theater in downtown Scranton on Sunday, Jan. 29, 2017. The event is all-ages and 21+ to drink. Doors at The […]

PHOTOS: The Ataris, Clever Clever, E57, and Condition Oakland at The Leonard in Scranton, 12/01/16

Just before two sold-out back-to-back shows at the First Unitarian Church in Philadelphia with MxPx, pop punk band The Ataris kicked off their winter tour at The Leonard Theater in downtown Scranton on Thursday, Dec. 1, marking the first time in years that a national touring band without local ties has graced The Leonard’s historic […] 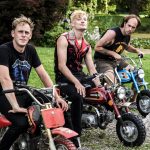