From a press release: Alternative rock band Cage the Elephant will bring their high energy live show to The Mann Center for the Performing Arts in Philadelphia’s Fairmount Park. The Grammy nominated rockers will perform on Thursday, May 12 in support of “Tell Me I’m Pretty,” their latest album produced by Dan Auerbach of The […] 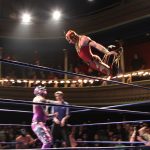