From a press release: Kingston punk/shoegaze band Title Fight rose from local favorites to international fame with three acclaimed studio albums, but in the last few years, the young musicians have taken time off to live life and focus on other projects, playing only sporadic shows like a benefit with Turnstile last year. Bassist/vocalist Ned […]

After rising success since their formation in 2003, Kingston punk/shoegaze band Title Fight has slowed down in the last two years, only playing sporadic shows here and there despite the high demand. Those who have been waiting to see them again can finally catch them at a benefit concert for their friend Aaron Warman and […]

From a press release: Due to “staggering popular demand,” a second Title Fight show at the First Unitarian Church has been added on Wednesday, Jan. 4, 2017 at 8 p.m. after their scheduled Friday, Jan. 6 concert sold out almost immediately. The Kingston punk/shoegaze band, who have only played a handful of shows this year, […]

Last month, Title Fight posted a short video documenting the process behind the creation of a mural in downtown Wilkes-Barre that would become the band’s album cover for “Hyperview,” due to be released on Tuesday, Feb. 3. Filmed in black and white with a GoPro Hero 3+, the video is as artistic as the endeavor […] 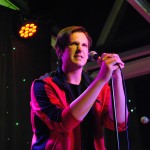