From a press release: Stand-up comedian Joe Ohrin brings his talents to Wise Crackers Comedy Club at Mohegan Sun at Pocono Downs in Wilkes-Barre on Friday, May 1 and Saturday, May 2 at 9 p.m. Ohrin, a native of Northeastern Pennsylvania, has performed in comedy clubs across the country, including the Comic Strip and Stand-Up […]

arrell Hammond is sniffling and searching for tissues when NEPA Scene arrives at Wise Crackers Comedy Club in Mohegan Sun at Pocono Downs. Despite being under the weather, he’s as friendly and gracious as he always is whenever he’s visiting Wilkes-Barre. Wise Crackers is owned by his longtime friend Scott Bruce, so it makes sense […] 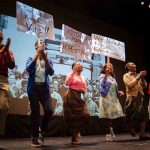