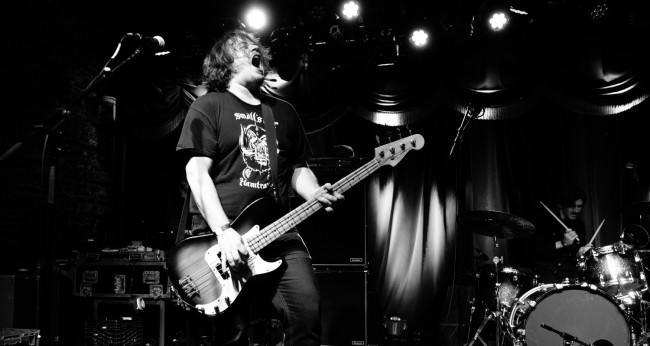 New York rockers Jounce, which features actor and comedian Danny Tamberelli of “The Adventures of Pete & Pete” fame, will bring their anthemic, punk-infused rock music to the Fowler Blast Furnace Room in the ArtsQuest Center at the SteelStacks in Bethlehem on Friday, March 9 with opening act Summer Scouts.

Jounce is an East to West Coast band centered in Brooklyn. Consisting of Dan Tamberelli on bass/vocals, Matt DeSteno on guitar, and Quinn Blandford on drums, the band is a mainstay at bars, clubs, music halls, colleges, and festivals, consistently building buzz and refining their presence in both the live and studio settings.

An ever-evolving post-punk and ’90s rock hybrid, the band is a product of a well-defined generation, only re-imagined and nearly impossible to describe, but easily digested. Tamberelli and DeSteno have been friends since childhood, even through Tamberelli’s bi-coastal lifestyle while he was Nickelodeon’s “Little Pete.” They like to think Pete Wrigley would dig the Jounce.

Tamberelli is a comedian, writer, actor, and musician – a quadruple threat. He started his career over 25 years ago on the enormously popular Nickelodeon show “The Adventures of Pete & Pete,” where he played the younger, but larger-than-life brother “Little Pete.” He also starred in the programs “Figure It Out” and “All That,” the latter for which he was credited as a sketch writer in his last year on the show. He has worked with comedians such as Janeane Garofalo, Chris Elliott, Paget Brewster, Colin Hanks, Doug Benson, Matt Braunger, and Paul F. Tompkins.

When he’s not showing off his seasoned comedy chops, Tamberelli also performs in two bands. The first, Jounce, is a mainstay at venues like New York’s Highline Ballroom, the Gramercy Theater, and Washington, D.C.’s State Theater. He also performs with the Undone Sweaters, a Weezer cover band and sketch group that features fellow comedians Jim Tews, Reid Faylor, and Andrew Short.

On top of all that, you can also catch Tamberelli and his TV brother from his Nickelodeon days, Mike Maronna, on the Feral Audio podcast “The Adventures of Danny and Mike.”