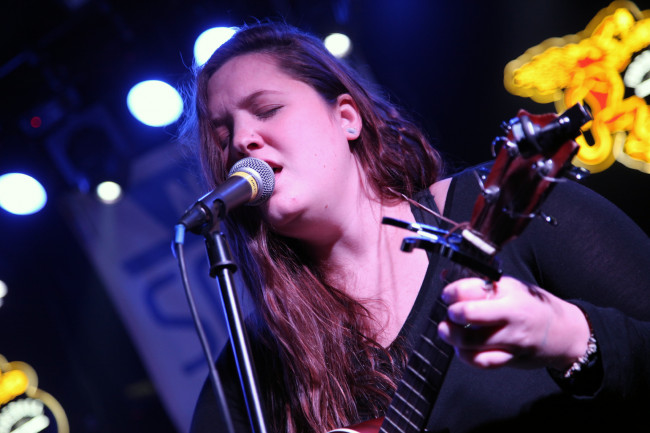 When Amanda Rogan’s first album released last year, the Northeastern Pennsylvania music scene was introduced to the soft, delicate music of Sweetnest, a personal project that comes from a place of love and vulnerability for the Scranton singer/songwriter.

She is opening up again this year with a new EP on the horizon, and the first daydreamy song from that album, “Baby,” is premiering today exclusively on NEPA Scene.

The 26-year-old refers to her songs as “honest, warm indie” or “indie folk,” while guitarist Matt Malone calls it “dream folk,” but no matter how it’s defined, Rogan says it’s “heavily inspired by nature, relationships, self-discovery, and emotions,” which can all be heard in “Baby.”

“It was the first new song I wrote for the EP. ‘Baby’ is a song about apprehension and moving on, deciding to let go and rediscover yourself while wanting to desperately grasp onto old ways,” she told NEPA Scene.

“Growing up, I chose to listen to musicians and writers who were very vulnerable about their life experiences. It was always refreshing to hear the honesty within the lyrics/structure, and it gave me a safe space to create and do the same. For over 10 years, writing has been a healthy form of coping and self-expression that I’m forever grateful to have as an outlet. I believe that sharing our thoughts and emotions through music is truly beneficial for everyone involved. It shows us all how connected we really are. It’s a beautiful, flowing cycle we all contribute to.”

Influenced by artists like Conor Oberst, Dry the River, Regina Spektor, Andy Hull, alt-J, Noname, Justin Vernon, Amy Winehouse, Daughter, and Bowerbirds, Rogan has been writing her own music since she was 13 years old, playing wind instruments and singing for years before switching to ukulele and guitar. Her love of writing poetry and short stories eventually led into penning lyrics and melodies.

Like any writer, she also loves a good play on words – hence, Sweetnest.

“I wanted something simple yet interesting that I felt represented my music. Sweetnest came from the word sweetness – which I call my dearest loved ones. It also holds an element of safety and a piece of nature as well,” she explained.

It debuted publicly with the full-length album “Until Now” in 2018, a beautiful collection of songs written over the course of 13 defining years of her life.

“I was young and learning so much about music, myself, love, and life in general every single day. Each song was written during a different phase of my life and was a way to express confusion, frustration, and pain – as well as excitement and joy,” Rogan recalled.

“The main reason this [upcoming] release will be different is simply because it will be a shorter EP as opposed to a full-length album. In addition, all of these songs are fresh and written at a new point in my life – a changed perspective. I see the world differently as I’m growing older, and that affects my songwriting greatly.”

Like “Until Now,” this as-yet-untitled EP is being recorded at JL Studios in Olyphant, working again with producers/engineers Joe Loftus and Jay Preston and with some new faces this time around.

“JL Studios has been one of my favorite places over the past few years. Joe Loftus and Jay Preston are experts in their field and have guided me through every process in the studio. I always work directly with them to develop the sound I am going for. Matt Malone, my guitarist, is also typically involved writing his lead parts, making me laugh and challenging my view on my own songs,” she said.

“On this new material, I was extremely lucky to be able to write with Daniel Rosler of Esta Coda and A Fire With Friends. There is also piano by the wonderful Chelsea Collins of AFWF and percussion by the amazing Steve Werner.”

Sweetnest is now a full band out of the studio as well, with the lineup featuring Malone, Collins, Werner, and Isabel Anderson. While they are focused on recording now, they will play a few live shows coming up, including one at the Irish Wolf Pub (503 Linden St., Scranton) on Saturday, April 27 with James Barrett, Gabby Borges, and Dive, starting at 8 p.m.

The EP is set for release at the end of the summer, though Sweetnest music can be found now on all streaming platforms. “Baby” is just the start of what looks to be a promising new year for a group that continues to grow and garner support from the local scene.

“I’m a sucker for a dreamy sound, and ‘Baby’ was always going to be that. However, I think the songs [on this EP] are going to differ stylistically from one to the next, but all will have my creative touch/vibe,” Rogan noted.

“The EP release is my main goal for 2019, along with playing more shows in Scranton and the surrounding areas. We hope to reach more people with our music and gain an even bigger following online as well. We were able to be featured on a few popular Spotify playlists and hope to have similar opportunities with this release. At the end of the day, we just want to keep creating and connecting with people through music.”

Learn more about Rogan and women in the NEPA music scene in Episode 67 of the NEPA Scene Podcast: