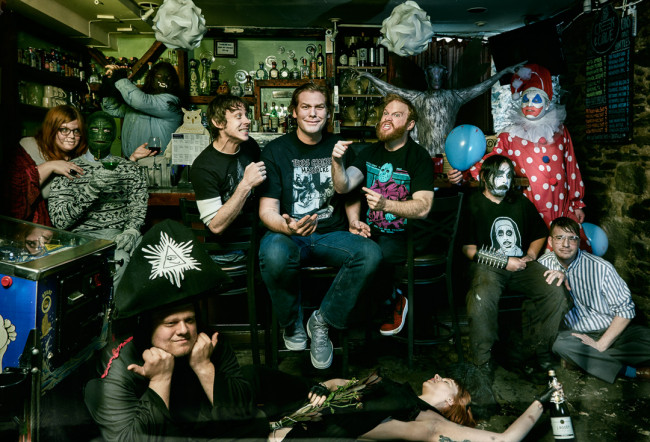 Fans of all things horrifying – from true crime and UFOs to the occult and paranormal – can relish the simultaneous chills and comedy of “The Last Podcast on the Left.” A morbid sense of humor and an open mind are required listening equipment, along with a sturdy constitution that can withstand macabre language and exposure to all things strange.

The award-winning podcast will host a live show at the Sands Bethlehem Event Center on Saturday, Aug. 17 at 8 p.m. as part of the show’s Back in the Habit World Tour.

“The Last Podcast on the Left” is an homage to the 1972 horror movie “The Last House on the Left,” which is itself a perfect example of the typical paranormal and horror-based fodder for discussion during each episode of the hour-long show. The podcast was founded in 2011 by three longtime friends: comedian and actor Henry Zebrowski, writer and musician Marcus Parks, and Ben Kissel, a Fox News writer who is sometimes referred to as a giant because he stands six feet, seven inches tall.

In April of 2017, The Last Podcast on the Left received a People’s Voice Webby Award for the new comedy podcast/digital audio category. This was the first year that the Webby Awards included a category for podcasts and digital audio, and the stiff competition in the comedy category included “2 Dope Queens” and “The Hilarious World of Depression.” Only nine percent of the 13,000+ entries in the Webby Awards even received a nomination; contestants were considered from 70 countries around the world. Also in 2017, “The Last Podcast on the Left” spawned its first spin-off, a live-streaming broadcast on the Adult Swim website known as “The Last Stream on the Left.”

As longtime friends, the three hosts already had great chemistry for the podcast’s premiere. Over the years, that chemistry has evolved into fairly standardized roles: Parks is the primary researcher, Zebrowski can be counted on to loudly and funnily voice the more conspiratorial side of things, and Kissel usually – although not always – acts as the stabilizing voice of reason.

Based in New York City, these friends poke irreverent fun at each other and at the dark subject matter that they cover – a habit that delights some fans and concerns others. This often prompts the hosts to repeatedly reassure listeners that their irreverence is directed at the killers and other “bad guys” they’re discussing, not at victims of the true crimes that feature in the more heavily researched episodes of the show.