In this episode, Lauren is away, so our podcast video editor and local filmmaker Jer Tobin steps in as we talk about the hacking of Sony and our strained relations with North Korea. While many news outlets are covering Seth Rogen and James Franco’s comedy about assassinating North Korean leader Kim Jong-un, “The Interview,” and whether or not it will be released by Sony, we believe the issue of cyberterrorism runs much deeper than discussion of the film and its release. We also introduce a new segment in which we respond to reader comments on the website and social media. 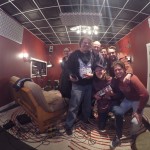