It was just announced that Motown legend Smokey Robinson will be coming to the Sands Bethlehem Event Center on Friday, Oct. 9 at 8 p.m., while classic rock hit-makers America will be performing there on Sunday, Nov. 8 at 8 p.m.

Smokey Robinson’s career spans over four decades of hits, receiving numerous awards, including the Grammy Living Legend Award, NARAS Lifetime Achievement Award, Honorary Doctorate (Howard University), Kennedy Center Honors, and the National Medal of Arts Award from the president of the United States. He has also been inducted into the Rock and Roll Hall of Fame and the Songwriters’ Hall of Fame.

Born and raised in Detroit, Michigan, Robinson founded The Miracles while still in high school. The group was Berry Gordy’s first vocal group, and it was at Robinson’s suggestion that Gordy started the Motown Record dynasty. Their single of Robinson’s “Shop Around” became Motown’s first No. 1 hit on the R&B singles chart. In the years following, Robinson continued to pen hits for the group, including “You’ve Really Got a Hold on Me,” “Ooo Baby Baby,” “The Tracks of My Tears,” “Going to a Go-Go,” “More Love,” “Tears of a Clown” (co-written with Stevie Wonder), and “I Second That Emotion.”

In addition to writing hits for The Miracles, Robinson wrote and produced hits for other Motown greats, including The Temptations, Mary Wells, Brenda Holloway, Marvin Gaye, and others. “The Way You Do the Things You Do,” “My Girl,” “Get Ready,” “You Beat Me to the Punch,” “Don’t Mess with Bill,” “Ain’t That Peculiar,” and “My Guy” are just a few of his songwriting triumphs during those years.

Bob Dylan pronounced Smokey as America’s “greatest living poet,” while John Lennon made countless remarks regarding Robinson’s influence on his music. In 1982, The Rolling Stones paid respect covering the hit “Going to a Go-Go.”

During the course of his 50-year career in music, with The Miracles or own his own, Robinson has accumulated more than 4,000 songs to his credit and continues to thrill sold-out audiences around the world with his high tenor voice, impeccable timing, and profound sense of lyric. Never resting on his laurels, Smokey Robinson remains a beloved icon in our musical heritage.

Dewey Bunnell and Gerry Beckly, better known as America, continue to thrill audiences around the world with the songs we all know and love.

No America concert is complete without the signature song, “A Horse with No Name,” the band’s debut single. Released at the end of 1971, it is amazing how this song has endured over the past 40-plus years. There’s no doubt that “Breaking Bad” helped it win a new generation of fans, but one of the most interesting aspects of this song was when it first hit the airwaves, many people thought it was a Neil Young song, including Young’s father, and many people still think it’s one of his songs to this very day.

One of the most popular soft rock groups of the ’70s, the duo, along with founding member Dan Peek, helped to define the folk rock sound coming out of California, paving the way for countless bands of that era.

The early part of the new millennium saw America release not only a handful of live albums as well as a holiday-themed studio recording, but also the exhaustive, career-spanning box set “Highway.” A number of DVDs showcasing the band in concert have also been released.

The duo most recently released “Back Pages,” an album of covers and songs that influenced them over the years. 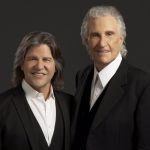