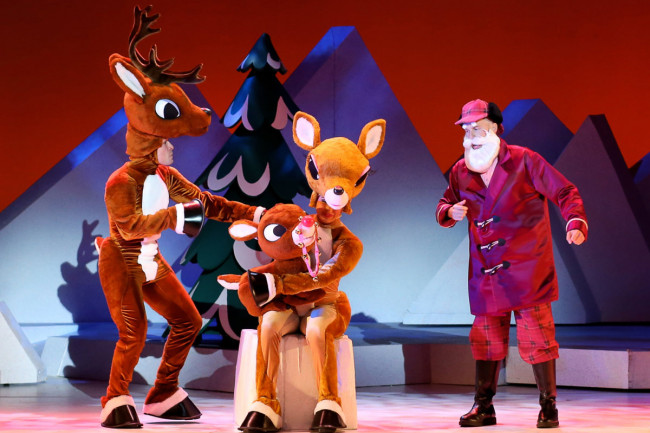 Back by popular demand following last year’s critically acclaimed and hugely successful inaugural tour, the world’s most famous reindeer and a holly jolly cast of iconic characters including Hermey the Elf, Yukon Cornelius, and the Abominable Snow Monster will help Santa save Christmas during three North American tours visiting 50 cities this holiday season.

Rudolph and friends will visit Wilkes-Barre’s F.M. Kirby Center on Thursday, Dec. 10 at 7 p.m. Tickets are on sale now and are available at the Kirby Center box office, online at kirbycenter.org, and by phone at 570-826-1100.

“Because our inaugural run was so popular, we will have three tours this year in an effort to bring Rudolph and his friends to even more families and young theatregoers across North America,” says Producing Partner Jonathan Flom.

“Rudolph the Red-Nosed Reindeer: The Musical” practically transports audience members into the television special as songs drive the plot while familiar and nostalgic set design with projections, costumes, and characters are brought to stage. The cast brings new energy to the classic songs and dialogue, while irresistible and loveable puppets help showcase the charming “roughness” from the television show’s stop-motion effects.

“We address all of the familiar story elements from the television special with a talented cast and puppeteers who help recreate the magic on stage,” says Producing Partner Bob Penola.

The story tells the tale of a young Rudolph who, because of the appearance of his bright, shining nose, is ousted from the reindeer games in Christmastown. He flees town, meets up with new friends Hermey and Yukon, and a series of funny and endearing adventures ensue, including a visit to The Island of Misfit Toys. Rudolph journeys home, where a snowstorm of epic proportions is threatening Christmas. Can Rudolph save his family and friends and help Santa save the holiday?

The production will expand on its campaign benefiting PACER’s National Bullying Prevention Center that launched in conjunction with the tour last year. More details will be announced.