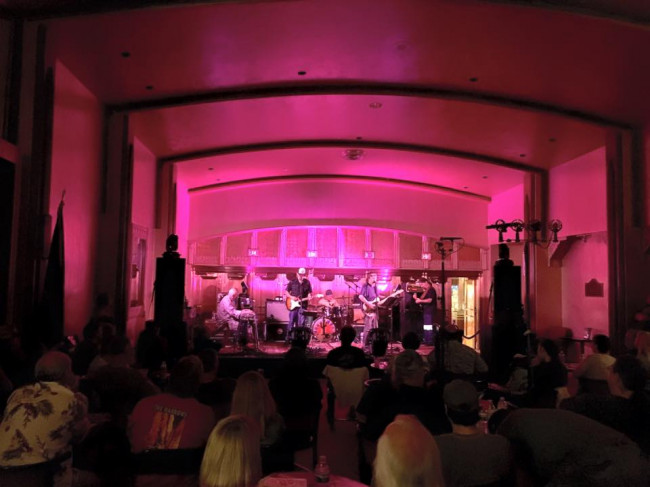 The unique sound of country rock filled the F.M. Kirby Center’s Chandelier Lobby in Wilkes-Barre on Friday, July 1 when the New Riders of the Purple Sage rode into town.

With a repertoire that leaned heavily on the band’s 1971 self-titled debut album, the New Riders kicked off its first set with that record’s “Last Lonely Eagle.”

“That was written 45 years ago,” singer and guitarist David Nelson said of the latter tune. “Amazing how timely it still is. It’s still going on.”

Other highlights of the 70-minute opening set included a strong version of Bob Dylan’s “Maggie’s Farm” with lead vocals by guitarist Michael Falzarano, and R.B. Greaves’ “Take a Letter Maria,” sung by bassist Ronnie Penque (the band first covered the song on its 1975 album “Oh, What a Mighty Time”).

NRPS first came together in 1969 when the Grateful Dead’s Jerry Garcia, Phil Lesh, and Mickey Hart started playing country songs with John “Marmaduke” Dawson and Nelson. After two years of touring with the Dead, the group was signed to Columbia Records by Clive Davis.

By the time the group’s first album was recorded, Dave Torbert took over on bass and Spencer Dryden, formerly of Jefferson Airplane, replaced Hart on drums.

The pedal steel guitar position was handed over from Garcia to Buddy Cage in time for the group’s second album in 1972.

Though band members came and went over the years, the original incarnation of NRPS lasted until 1997. The current lineup of Nelson, Cage, Falzarano, Penque, and drummer Johnny Markowski has been together since the band was relaunched in 2005.

After the intermission, the New Riders came out swinging with “Where I Come From,” the title tune of its 2009 album.

The band then dug deep into the Dylan songbook – first, bassist Penque sang “You Angel You,” then guitarist Falzarano countered with “Lo and Behold.”

Nelson scored big with a tasty rendition of Chuck Berry’s “You Never Can Tell,” then the band started toward the finish line with the first album’s “Henry” and “Louisiana Lady.”

The second set came to a close with a great version of The Rolling Stones’ “Dead Flowers,” a tune the band has been playing since 1974’s Garcia-produced live album “Home, Home on the Road.”

“I guess you got nowhere to go,” Falzarano said as the band came back on stage for its encore. “That’s all right; we don’t either.”

Nelson then sang perhaps the band’s most famous song, “Panama Red” from 1973’s “The Adventures of Panama Red,” and a lovely version of the Dead’s “Ripple” to end the evening in fine fashion.