Due to popular demand, Chippendales, the No. 1 male revue in the world, has added an additional performance at the Sands Bethlehem Event Center on Friday, Feb. 9 at 11 p.m. A very limited amount of tickets remain for the previously announced 7 p.m. performance on Feb. 9.

In 1979, the Chippendales began gyrating their way into the hearts and laps of women everywhere, becoming the first all-male dance troupe for women in history. Named after the Chippendales-style classic furniture that adorned the original club in Los Angeles, the brand quickly became a pop culture phenomenon. The success of the Los Angeles club spawned a New York club as well as other permanent locations and touring troupes that traveled the world, producing shows across Europe, the United Kingdom, Australia, and Asia. Today, the show’s flagship company plays nightly at the Rio All-Suite Hotel & Casino in Las Vegas while the touring company travels the world.

Over the last 38 years, the men of Chippendales have performed for more than 100 million women in over 100 countries, have traveled more than 6.7 million miles while touring, have torn away over 1.2 million tank tops, worn 56,000 bowties and cuffs, and have been photographed more than 70 million times. The famous Chippendales calendar became the first all-male calendar targeted to women, has sold more than 10 million copies worldwide, and has been printed in over nine languages.

Named “the most wanted men in Vegas” by ET’s “The Insider,” Chippendales captures the perfect balance of sex appeal and tasteful teasing, eliciting waves of screams from their excited audience. This high-energy, fully choreographed, interactive show features some of the most physically elite men in the world who playfully dance and sing their way into the hearts of birthday girls, bachelorettes, and girlfriends who just want to have fun.

Annually, the men of Chippendales will be seen by almost two million people worldwide. The cast, a very exclusive fraternity of only 24 members, is split across two productions – one based in Las Vegas at the Rio All-Suite Hotel & Casino and the other currently selling out venues around on their world tour and becoming icons of American pop culture.

They’ve been featured on numerous national television shows, including the Emmy Award-winning CBS series “The Amazing Race,” “The Ellen DeGeneres Show” (where TV legend Betty White received a special surprise performance), and “The Real Housewives of Beverly Hills” (giving Lisa Vanderpump and Taylor Armstrong a night they will never forget). Other television highlights include ABC’s “The View,” Bravo’s “Watch What Happens Live,” “The Wendy Williams Show,” CBS’ “The Talk,” “The Oprah Winfrey Show,” and “Entertainment Tonight,” among others. Previous celebrity guest hosts featured in the Las Vegas production include supermodel Tyson Beckford, “Beverly Hills 90210” and “Sharknado” star Ian Ziering, and Joey Lawrence, among others. Most recently, Nyle DiMarco, a model, actor, and deaf activist, joined the cast as the first ever deaf host.

Chippendales, one of the world’s most recognized brand names, is the premier provider of entertainment for women. The company produces Broadway-style shows worldwide and licenses its intellectual property for select consumer products, ranging from apparel and accessories to slot machines and video games. The company also operates chippendales.com, an online lifestyle and entertainment destination for women. Chippendales has headquarters in New York, with offices in Las Vegas and London. In addition, Chippendales has recently launched its sexy new show, 53X, a coed cabaret, to critical-acclaim at Paris Las Vegas. 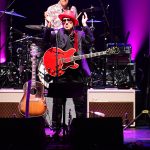