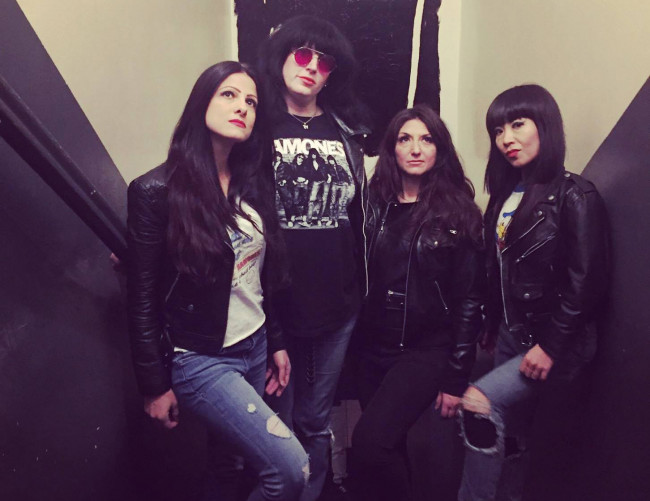 Rockaway Bitch, who bring a female attitude to classic Ramones songs, will play in Pennsylvania for the first time when they headline a Punk Rock Bar-B-Q at the Border Bar in Pittston on Saturday, Sept. 1.

The outdoor event in the new Camp Rattler Beer Garden will also feature performances by Dance Hall Devils, Social Distortion tribute band Reach for the Sky, and The Dismissed, with special guests TBA.

The barbecue at the Border Bar (170 Laurel St., Pittston) starts at 3 p.m., and the music starts at 4 p.m. For more details, see the Facebook event page.

Taking their name from the song “Rockaway Beach” off the Ramones’ third studio album, “Rocket to Russia,” Rockaway Bitch is an all-female tribute to punk rock icons the Ramones. Based in New York City, the band is comprised of, in their own words, “four badass bitches” who embody all of the punk scene attitude necessary to do the Ramones justice. They are of the opinion that you do it right or you don’t do it at all. Their goal is not to cover the music of the Ramones, but to pay tribute to the songs and the band.

Since 2014, they have played for audiences full of Ramones diehards, many of which have shared stories of attending numerous Ramones shows and personal accounts of meeting the members. Time and time again, they are commended for the excellence they put forth as well as for keeping the music alive.

Not only have they received approval from the Ramones family of fans, but they have also been given a nod by CJ Ramone (Ramones bassist from 1989-1996), who shared their video rendition of “Merry Christmas (I Don’t Want to Fight Tonight)” on his social media page and exclaimed “Bad ass sisters!” Additionally, in June of 2016, Rockaway Bitch was asked to play at the Queens Museum for “Hey! Ho! Let’s Go,” the Ramones’ 40th anniversary exhibit. It was a great privilege for the band to perform as part of such a momentous event.

During the performance, Ramones tour manager Monte Melnick came on stage, stating, “I just wanna say, these girls are doing a great job! Let’s have a big hand for them, yes! I’ve seen many Ramones shows; they’re doing a great job.” And it’s with these blessings that the Bitches vow to continue their mission, which is to bring the greatest punk rock music ever written back to the live stage, where it is best experienced.

See NEPA Scene’s photos from the opening concert at the Camp Rattler Beer Garden at the Border Bar back in June here and learn more about Camp Rattler events in an interview with promoter James Callahan in Episode 61 of the NEPA Scene Podcast: