Produced by Live Nation, the 35-city summer outing kicks off July 21 in St. Louis, Missouri at the Hollywood Casino Amphitheatre and will make stops in Detroit, Atlanta, Austin, and more before wrapping on Sept. 25 in Salt Lake City, Utah at the USANA Amphitheatre. Breaking Benjamin will bring the tour home to The Pavilion at Montage Mountain in Scranton on Saturday, Aug. 10 at 5:30 p.m.

Tickets to The Pavilion at Montage Mountain (1000 Montage Mountain Rd., Scranton) show go on sale to the general public beginning this Friday, Feb. 22 at 10 a.m. at livenation.com. Citi is the official pre-sale credit card for the tour. As such, Citi cardmembers will have access to purchase pre-sale tickets beginning Wednesday, Feb. 20 at noon until Thursday, Feb. 21 at 10 p.m. through Citi’s Private Pass program.

Fans can also get early access to tickets beginning Wednesday, Feb. 20 by joining the newly launched Breaking Benjamin fan club, “The First Order.” Fans can sign up at breakingbenjamin.com to receive a special code allowing access to purchase tickets before the general public.

Breaking Benjamin’s self-produced sixth studio album, “Ember,” debuted at No. 3 on the Billboard Top 200 and marks the multi-platinum-selling band’s fourth Top 5 debut on the Billboard Top 200, following 2015’s No. 1 debut for “Dark Before Dawn” (gold), 2009’s “Dear Agony” (platinum) at No. 4, and 2006’s “Phobia” (platinum) at No. 2. “Ember” spun off two No. 1 hits on Active Rock Radio with “Torn in Two,” granting the band their ninth No. 1 song, while “Tourniquet” is currently No. 17 and rising on rock radio. “Ember” adds to a healthy 7 million+ total album units sold for Breaking Benjamin, charting Top 10 across numerous countries worldwide and topping No. 1 charts across multiple genres, including Top Alternative Albums, Top Rock Albums, Top Hard Rock Albums, and Top Digital Albums. Breaking Benjamin boasts an impressive 6.8 billion combined audio/video streams worldwide with a social imprint of over 6.5 million, a testament to the band’s global influence and loyal fan base.

Ask Breaking Benjamin vocalist, songwriter, and guitarist Ben Burnley about the significance of the album title and his answer hints at intriguing new dimensions: “An ember can either be the end of something or the beginning of it.”

Since the release of their full-length debut “Point #1” in 1999, Chevelle have stood at the forefront of hard rock, consistently evolving and progressing while delivering a series of ubiquitous and inescapable anthems. 2002’s breakout “Wonder What’s Next” would go platinum, yielding smashes such as “The Red” and “Send the Pain Below,” while its follow-up “This Type of Thinking Could Do Us In” reached gold status. In 2011, “Hats Off to the Bull” landed at No. 9 on the Billboard Top 200 and delivered “Face to the Floor.” “La Gárgola” crashed into the Top 5 at No. 3 and boasted “Take Out the Gunman.” 2016’s “The North Corridor” represented new heights for the group, marking their fourth Top 10 bow on the Billboard Top 200.

Since 2003, internationally acclaimed and multi-platinum-certified Canadian band Three Days Grace has staked a spot among the hard rock vanguard, breaking records, toppling charts, and moving millions of units worldwide. Their song “Infra-Red” off the band’s most recent album, 2018’s “Outsider,” earned them their 14th No. 1 single on U.S. Billboard’s Mainstream Rock Songs chart, breaking the all-time record for most No. 1 U.S. singles on Active Rock Radio ever. In 2015, “Human” marked the group’s second straight No. 1 slot on the Billboard Top Hard Rock Albums chart as well as their fourth consecutive debut in Top 20 of the Top 200. It spawned two No. 1 singles, “Painkiller” and “I Am Machine,” signaling their 13th overall and fifth consecutive No. 1s on the U.S. Active Rock Radio chart. Moreover, the four-piece consistently averaged a staggering 3.9 million monthly listeners on Spotify, remaining one of the most listened to rock bands in the world. In 2012, “Transit of Venus” soared to the Top 5 of the Top 200 and garnered a nod for Best Rock Album of the Year at the Juno Awards. The seminal “One-X” (2006) notched an RIAA triple-platinum certification as “Three Days Grace” (2003) was minted platinum and “Life Starts Now” went gold. To date, their veritable arsenal of No. 1 songs includes “Chalk Outline,” “The High Road,” “Misery Loves My Company,” “World So Cold,” “Good Life,” “Break,” “Never Too Late,” “Animal I Have Become,” “Pain,” “Just Like You,” and “Home.” The band was most recently nominated for three 2019 Juno Awards for Album of the Year, Group of the Year, and Rock Album of the Year and is currently on tour supporting Disturbed.

Dorothy was built around Dorothy Martin, a singer who was born in Budapest but raised in San Diego. As a child, she started singing early and eventually made her way to Los Angeles. Rolling Stone named Dorothy one of the best 50 Best New Artists of 2014 and, soon after, the band was signed by Jay-Z’s Roc Nation. Martin recently put together a new high-level and powerful band that includes guitarists Owen Barry and Leroy Wulfmeier, bassist Eliot Lorango, and drummer Jason Ganberg. Dorothy is releasing their second full-length album, “28 Days in the Valley,” on March 9; the lead single “Flawless” is out now. The band is managed by We Are Hear and represented by Roc Nation.

The turquoise-trussed singer Diamante is having a breakout year with her debut album, “Coming in Hot.” It features her latest single, “Haunted,” which has surpassed three million views on YouTube and is climbing the Active Rock charts. She was also the featured vocalist on the No. 1 hit duet with Bad Wolves “Hear Me Now,” which was included in Billboard’s 2018 Year-End Hot Rock Songs chart.

See NEPA Scene’s photos of Breaking Benjamin performing with Five Finger Death Punch and Bad Wolves at The Pavilion at Montage Mountain last year here and photos from their album release meet and greet at the Gallery of Sound in Wilkes-Barre here. 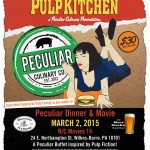