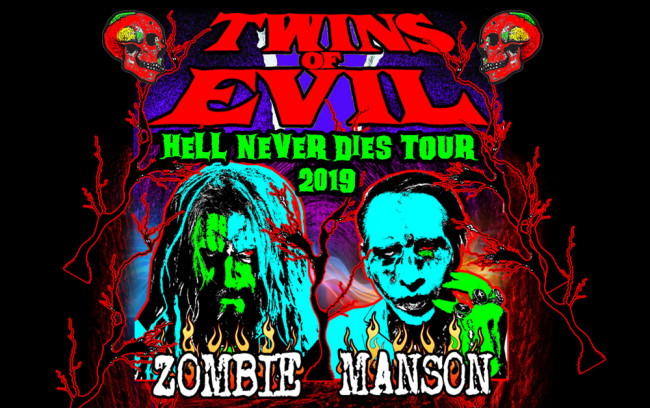 It was announced today that the “Twins of Evil,” Rob Zombie and Marilyn Manson, will continue performing together in 2019 on the co-headlining Twins of Evil: Hell Never Dies Tour. The North American summer tour kicks off in Baltimore, Maryland on July 9 and makes appearances at Rock USA in Oshkosh, Wisconsin and Rock Fest in Cadott, Wisconsin.

It will stop at the PPL Center in Allentown on Wednesday, July 10 at 7 p.m.

Tickets for the PPL Center (701 Hamilton St., Allentown) show go on sale to the general public beginning this Friday, Feb. 22 at 10 a.m. at livenation.com. A special blabbermouth.net pre-sale will begin on Thursday, Feb. 21 at 10 a.m. and end on Thursday, Feb. 21 at 10 p.m. local time. When prompted, type in the pre-sale code “EVIL19” to access tickets before the general public. VIP packages will be available starting Wednesday, Feb. 20.

Citi is the official pre-sale credit card for the tour. As such, Citi cardmembers will have access to purchase pre-sale tickets beginning Wednesday, Feb. 20 at noon until Thursday, Feb. 21 at 10 p.m. through Citi’s Private Pass program.

Marilyn Manson is working on the follow-up to his critically acclaimed 2017 album “Heaven Upside Down.” “We Know Where You Fucking Live” was issued as the record’s lead single on Sept. 11. This was followed on Sept. 20 by “Kill4Me,” which went on to become the band’s highest-peaking single ever on Billboard’s Mainstream Rock chart. Four music videos have been released for the two aforementioned singles, as well as “Say10” and “Tattooed in Reverse,” two of which featured actor Johnny Depp. The record received positive reviews from music critics upon release, with several publications claiming it continued the creative resurgence which began with their previous album. It was also successful commercially, debuting at No. 8 on the Billboard 200, and was the band’s highest-charting album in over a decade in several territories, including Australia and the United Kingdom.

Past praise for the Twins of Evil Tour:

“A rocker’s dream come true with the most intense music the world will ever know.” – Aquarian Weekly

“How much shock can one rock show handle? Concert in Virginia Beach has an answer.” – The Virginian-Pilot

“Like being strapped into an electric chair and zapped with 50 trillion volts of heavy metal madness.” – Las Vegas Review Journal

“Rob Zombie and Marilyn Manson’s performances are the stuff of nightmares – in the best possible way.” – Phoenix New Times

Listen to Zombie and Manson’s rendition of The Beatles’ “Helter Skelter” below: 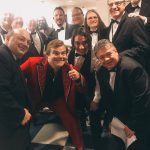