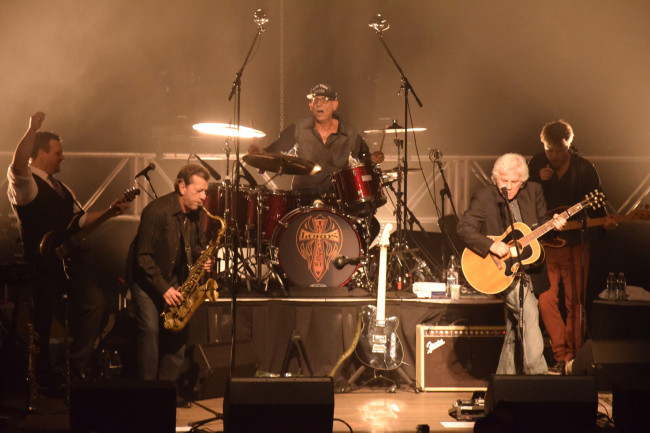 The Lords of 52nd Street are New York’s favorite band. They have sold more than 150 million records. They helped establish Billy Joel’s formidable sound in the 1970s and ’80s. And they continue to perform their legendary hits still to this day.

It was announced today that The Lords of 52nd Street – led by Richie Cannata, Liberty DeVitto, and Russell Javors – will bring that undeniable sound and those unforgettable hits to the F.M. Kirby Center in Wilkes-Barre on Saturday, May 11 at 8 p.m., sponsored by the Hilton Garden Inn in Wilkes-Barre.

In 1975, Billy Joel started looking for a new band. He had already released two studio albums with minimal success and was looking for a New York sound for his next record, “Turnstiles.” His first choice to start to build the band was a fellow Long Islander and bass player, Doug Stegmeyer.

Joel asked Stegmeyer if he knew some musicians to help round out the band and he replied, “You know them already.” Stegmeyer suggested former bandmates Liberty Devitto and Russell Javors, two guys that Joel had known well from the Long Island music scene, and the band began to rehearse and truly become a unit.

Stegmeyer, DeVitto, and Javors joined Joel in studio to record “Turnstiles” in 1976. Meanwhile, Joel was also looking for a saxophone player who could play keyboards.

Al Stegmeyer, Doug’s brother, was a sound engineer on the album and recommended Richie Cannata to play saxophone and keyboards. Cannata walked into Ultrasonic Studios in Hempstead, New York and heard for the first time the legendary hit “Angry Young Man.”

Joel, Stegmeyer, DeVitto, and Javors recorded the tune a day earlier, and Cannata was blown away by their experienced playing and speed. Cannata went into the studio and immediately recorded the unforgettable Empire State love song “New York State of Mind.” What made the music on this album so special were the dedicated and loyal New York musicians behind its creation.

“Turnstiles” was a huge success because Joel and his new recording and touring band performed the songs with such a fresh and young-driven beat. DeVitto, Javors, and Cannata blew away audiences with their playing and helped Joel sell millions of albums. The band went from playing local colleges and universities across the nation to performing at the world’s most famous arena, Madison Square Garden.

After the success of “Turnstiles,” Joel and the band began looking for a music producer for their next album. George Martin, the legendary Beatles producer, offered him a record deal, but he wanted Joel to record with studio musicians. Joel would not create this new album without The Lords of 52nd Street, so he told Martin, “Love me. Love my band.”

Joel turned down Martin and was pleased to work with the legendary Phil Ramone.

Ramone and Joel coined DeVitto, Cannata, Javors, and Stegmeyer as The Lords of 52nd Street and went into Columbia Studios to record “The Stranger.” The album was a huge commercial success, holding a RIAA diamond certification (10-times-platinum) and several No. 1 singles, including “Only the Good Die Young” and “Just the Way You Are.”

The Lords of 52nd Street, alongside the Piano Man, led an international tour and performed at famous arenas including Wembley Stadium, Royal Albert Hall, the Sydney Opera House, Nassau Coliseum, Madison Square Garden, Carnegie Hall, Budokan, the LA Forum, and many others.

The band also performed on NBC’s “Saturday Night Live” and on the BBC’s “The Old Grey Whistle Test” back in 1978. The Lords of 52nd Street helped Joel establish a popular music career and the opportunity to perform and record in the most prestigious settings.

Joel and the band returned to the studio and recorded Grammy Award-winning albums “52nd Street,” “Glass Houses,” and “The Nylon Curtain.”

The band recorded and toured with Joel for over a decade, and it wasn’t until their induction into the Long Island Music Hall of Fame that they decided to reunite after a 30-year separation.

Since then, the band has toured regularly and they do not plan on stopping anytime soon. Fans have declared that The Lords’ live performances sound just like the original recordings with Billy Joel, and they continue to keep this classic music alive today.