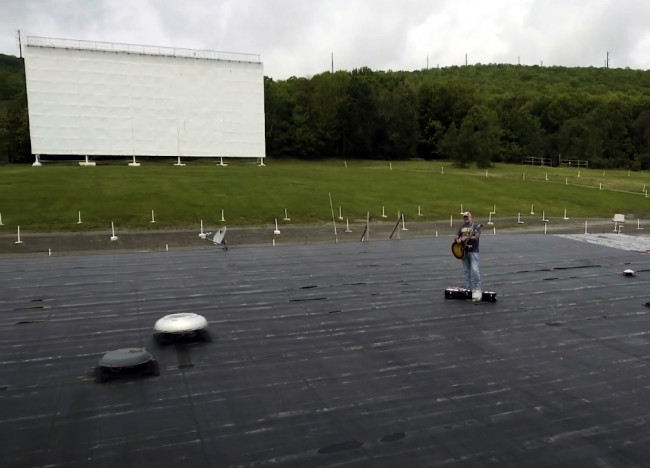 For those who are disappointed that Brooks won’t be performing in person, the Circle Drive-In Theatre in Dickson City is making its event even more special with live music for patrons who show up early on Saturday, June 27.

Singer/songwriter Chris Shrive of Old Forge country band Flatland Ruckus, who has been performing safely outdoors in the back of his pickup truck throughout the coronavirus shutdown, is organizing a tailgate party with special guests Mike Elward and Marcus Welliver of The Wells River Band, Shane Fabiani, and Rob Husty starting at 4:30 p.m. The Brooks show begins at dusk, around 9 p.m. Shrive has even built a stage on the roof of the concession stand for the local performers.

“You never have to leave your vehicle! We are making history here in NEPA, finding ways around social distancing guidelines to still have entertainment. Enjoy life again!” he said.

“Let’s have some fun! Bring the car clubs, biker organizations, rat rods, whatever club you’re in! BYOB tailgating like a boss!”

Tickets for the Garth Brooks concert, which include admission to the local opening show, went on sale today at noon at ticketmaster.com/garthbrooks and appear to be already sold out. The general admission tickets were $100 per car or truck. Gates at the Circle Drive-In Theatre (1911 Scranton/Carbondale Hwy., Dickson City) open at 4 p.m.

Country fans who missed out on tickets or would prefer to stay inside can catch a live stream of the opening acts with Ionic Development and NEPA Scene. More details on that will be available next week.

“I am so excited to get to play again. I have missed it so much and want to get back to it,” Brooks said when the national show was announced on June 11.

“This drive-in concert allows us all to get back to playing live music without the uncertainty of what would be the result to us as a community. This is old school, new school, and perfect for the time we are in.”

“Families need safe entertainment options that they can enjoy together this summer,” said Encore Live founder and CEO Walter Kinzie.

“We’re excited to partner with Garth, who’s already done so much to help the entertainment industry during these tough times, to provide a truly unique and incredible concert that will do a whole lot of good for local businesses and communities.”

This show will adhere to many of the same CDC guidelines and safety protocols that the Circle Drive-In has had in place since it reopened on May 1, including face mask requirements, social distancing, and strict disinfecting and cleaning procedures. At least 6 feet of space must be maintained between vehicles.

“I hope people are going to start working on flashing their light, honking their horns and hopefully rolling down their windows,” Brooks said on “Good Morning America.”

“The cool thing is drive-ins aren’t like they were when we were kids,” he continued. “We had the speaker that you put on the window, now just tune right into your own car radio. You can blast it and blare it as loud as you want – windows up, windows down, sing along. This is a perfect way for us to still get to play music and still follow all the rules that we’re under right now.”

Learn more about Chris Shrive and Flatland Ruckus in Episode 115 of the NEPA Scene Podcast: