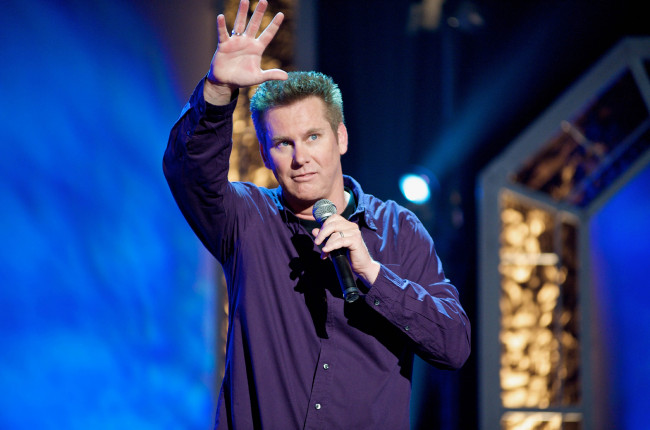 Comedian Brian Regan has announced summer and fall dates for his non-stop theater tour, which will visit 40 cities from June-December. The current spring leg of the tour is taking Regan to 38 cities throughout North America, including Regan’s return to the F.M. Kirby Center in Wilkes-Barre on Sunday, Sept. 25 at 7 p.m.

On Sept. 26, 2015, Regan made history with the live Comedy Central broadcast of “Brian Regan: Live from Radio City Music Hall,” the first-ever live broadcast of a stand-up special in Comedy Central’s history. The special was critically-acclaimed, with Vanity Fair calling Regan “the funniest stand-up alive,” and is now available on CD, DVD, or as an audio or video download.

Currently a regular on “The Tonight Show Starring Jimmy Fallon,” Regan made 28 appearances on the “Late Show with David Letterman,” the most of any comic in the show’s 22 years on CBS.

Regan made a scene-stealing cameo in Chris Rock’s film “Top Five,” and he was seen in Jerry Seinfeld’s “Comedians in Cars Getting Coffee,” but it is stand-up comedy that is his focus, visiting close to 100 cities each year and selling out some of the most beautiful venues on the continent.

“He is one of my favorite, favorite stand-up comedians.” – Jerry Seinfeld

“No comedian in the world says, ‘Yeah, I want to follow Brian Regan.’” – Chris Rock

“Brian Regan is one of my favorite comedians ever. He is unbelievably funny.” – Jimmy Fallon

“Saw Brian Regan last night at the Arlington Theater in Santa Barbara. In a word (or three): simply the best!” – Dennis Miller

“You’re one of the rare guys that is universally respected by comics as being one of the most hilarious guys out there at stand-up.” – Joe Rogan

“Brian Regan is one of my favorite comics of all time, he’s just the best… an absolute master.” – Bill Burr

“You’re the guy people look up to. … Brian Regan’s the funniest guy. … There’s Brian Regan, and then there’s other people.” – Marc Maron