Aaron Bruch, the bassist and backup singer for multi-platinum Wilkes-Barre rock band Breaking Benjamin, joined many fans and fellow musicians today in remembering Kurt Cobain on the 25th anniversary of the frontman’s death with an acoustic take on a classic Nirvana song.

In his first upload to his new YouTube channel, Bruch posted a simple but haunting cover of “Something in the Way.” Shot with sparse lighting “in a creepy underground pool” (as he says in the description) deep in the allegedly ghost-filled basement of The Rave/Eagles Club in Milwaukee, the echoing vocals and dark shadows obscuring his face add to the already somber tune that closes the grunge band’s 1991 mainstream breakout album “Nevermind” and is featured on their iconic “MTV Unplugged in New York” recording.

Cobain died at his Seattle home on April 5, 1994 at the age of 27; his death was ruled a suicide by authorities after his body was found three days later, leaving a massive musical legacy behind that influenced countless bands, including Breaking Benjamin, who have covered Nirvana songs like “Lithium” and “Smells Like Teen Spirit.”

While Breaking Benjamin’s worldwide fan base has only known Bruch for a few years now, seeing him occasionally perform with lead singer and guitarist Benjamin Burnley before officially joining Breaking Benjamin in 2014, he has been part of the Northeastern Pennsylvania music scene for decades, playing solo and in various bands like OurAfter and Pan.a.ce.a, building up his own base of followers while also teaching music. He is the only current member of Breaking Benjamin hailing from Wilkes-Barre aside from Burnley himself and now has a prominent role in the band’s music, both on stage and in the studio.

Burnley said in interviews promoting their latest record, “Ember,” that, in the past, he largely wrote everything himself, but with this sixth album, he let the current lineup of Bruch, guitarists Jason Rauch and Keith Wallen, and drummer Shaun Foist make more “significant contributions to the music,” such as Bruch writing the music and vocals for the chorus of the first single, “Red Cold River.”

“They’ve really contributed a lot more than anybody else has in the past,” Burnley said of his bandmates. “And they’re more like-minded, musically, than people I’ve ever played with, and so everything that they gave me fit into songs that I already had.

“I wrote the majority of our last five albums, and so I’m good with that – you know, that’s enough for me,” he added with a laugh. “Five albums pretty much by myself; I’m ready to pass it along. It’s more fun when you’re not doing everything by yourself.”

Bruch has been a longtime friend and supporter of Burnley, joining him live on stage many times before he became a part of the main band. Once a lawsuit with previous Breaking Benjamin members was settled and Burnley started playing out again around 2013, he appeared with Bruch at his side. At their recent shows, Bruch backs him up as well as sings entire songs on his own.

“Everybody that’s in the band now is deliberately handpicked,” Burnley said, specifically pointing out that “Keith and Aaron are really, really amazing singers. That’s kind of what the band always needed.”

Following a sold-out Scranton concert last year, it was announced in February that Breaking Benjamin will return to The Pavilion at Montage Mountain on Saturday, Aug. 10 as part of their coast-to-coast summer tour. With opening sets by Chevelle, Three Days Grace, Dorothy, and Diamante, that show is also expected to sell out as NEPA welcomes two of their own back home.

See NEPA Scene’s photos of Breaking Benjamin performing with Five Finger Death Punch and Bad Wolves at Montage Mountain last year here and photos from their album release meet and greet at the Gallery of Sound in Wilkes-Barre here. 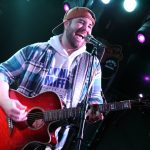