We have some Upstate New York porterness on today’s MBR with Rohrbach Brewing’s Vanilla Porter! 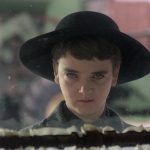