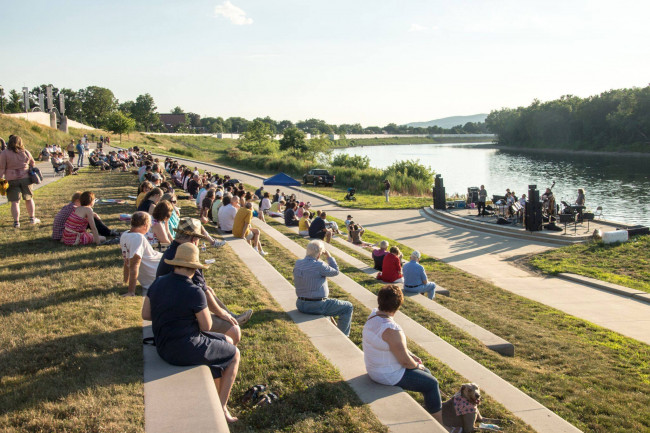 Wilkes-Barre’s Riverfront Parks Committee is now in the running to bring a 10-week live music series to the River Common in downtown Wilkes-Barre during the summer of 2017.

The Riverfront Parks Committee hopes to qualify as one of 15 winning organizations competing in the Levitt AMP [Your City] Grant Awards, which are sponsored by the Mortimer & Mimi Levitt Foundation, a national foundation dedicated to strengthening America’s social fabric through free live music.

The Levitt AMP [Your City] Grant Awards are an exciting matching grant opportunity created by the Levitt Foundation to serve small to mid-sized towns and cities. Up to 15 nonprofits will receive $25,000 each in matching funds to produce their own Levitt AMP Music Series – a free outdoor concert series featuring a diverse lineup of professional musicians.

A successful campaign for the Riverfront Parks Committee depends on community participation to get as many online votes as possible to bring the concert series to town. Community support, as measured by the number of online votes received, will be one of the key factors when the Levitt Foundation selects up to 15 winners from across the nation.

Supporters are asked to visit the website to register and vote. Online public voting is now open and ends Monday, Nov. 21 at 2 p.m. The Top 25 finalists will be selected through online public voting. The Levitt Foundation will then review the proposals of these 25 finalists and will select up to 15 Levitt AMP winners, which will be announced on Jan. 5, 2017.

“However, our efforts are always limited by available funds, so this Levitt AMP grant would be a huge help. The grant would allow us to dramatically increase our River Common programming in 2017, providing a free summer concert series for the community to enjoy and creating new opportunities to showcase our beautiful riverfront and encourage environmental awareness and stewardship. We need assistance from the Wyoming Valley and beyond to win the Levitt AMP grant.”

F.M. Kirby Center Executive Director Will Beekman offered to assist the Riverfront Parks Committee in programming a series on the river in a letter to the Levitt Foundation.

“Our relationship with the community is a strong one. We often say that we are here for the community, but we are also here because of the community, and we remain committed in bringing arts and culture into the downtown region,” Beekman wrote about the Kirby Center.

“A big part of this commitment is found in our support of organizations like the Riverfront Parks Committee. The Kirby Center is present at all events on the river, and we are instrumental in helping the organization advertise these events. But, quite honestly, more can be done. More needs to be done. Given the proper resources, the Riverfront Parks Committee can do bigger and better things along the river, and a Levitt AMP [Your City] Music Series grant would offer tremendous assistance.”

See photos of the David Bixler Quintet playing jazz music with students and alumni of Wyoming Seminary on the riverfront last year here.