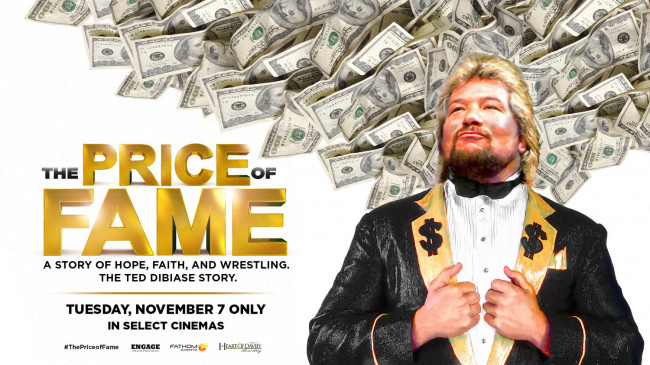 Ted DiBiase is known by scores of fans as the “Million Dollar Man,” the larger-than-life character that helped launch pro-wrestling into the international spotlight and one of the greatest villains in pro-wrestling history. But the price of fame took DiBiase away from his family and into an egocentric world of self-fulfillment and desire, where he spiraled out of control.

In the documentary “The Price of Fame: The Story of Ted ‘Million Dollar Man’ DiBiase,” audiences will witness DiBiase’s story and learn about his inspiring search for meaning, which changed him from a self-absorbed, jet-setting wrestler into a devoted Christian, family man, and ordained minister.

Fathom Events and Engage Media Partners present “The Price of Fame” in select cinemas for a special one-night event on Tuesday, Nov. 7 at 7 p.m.

Tickets for “The Price of Fame” can be purchased online by visiting fathomevents.com or at participating theater box offices. Moviegoers throughout the U.S. will be able to enjoy the event in more than 600 select movie theaters through Fathom’s Digital Broadcast Network, including Cinemark 20 (40 Glenmaura National Blvd., Moosic), Regal Dickson City Stadium 14 & IMAX (3909 Commerce Blvd., Dickson City), and Cinemark Stroud Mall (160 Stroud Mall, Stroudsburg).

“’The Price of Fame’ shows that fame, money, power and prestige are not what’s really important in life. Devotion to family and friends, giving of yourself to others and building strong character and integrity – these are life’s priceless commodities and are far more rewarding than anything money can buy,” said DiBiase.

“Although I appreciate my time in wrestling, I don’t want to be remembered as a wrestling legend, but someone who, through much grace and mercy, overcame many mistakes. I want to be known as a husband, father, grandfather, and friend who left a legacy of selfless love and devotion.”

Peter Ferriero’s directorial debut will undoubtedly stir nostalgia in wrestling fans everywhere, as “The Price of Fame” explores the life of DiBiase and his family, from his pro-wrestling father to his pro-wrestling son. They built a legacy in the ring, but their lasting impact will be felt for generations outside of that ring. Audiences will discover what the price of fame was for DiBiase, and the priceless faith he found that changed everything.

“There’s no doubt that professional wrestling has made an impact on the world, particularly during its huge rise in the ‘80s,” Fathom Events VP of Programming Kymberli Frueh said.

“DiBiase’s story encompasses fame, fortune, faith, and family, and begs the question, ‘Is the price of fame worth it all?’”

“This historical account of the rise of professional wrestling through the eyes of the DiBiases provides a ‘behind the curtain’ look that pro-wrestling fans have been waiting for. It also delivers a transformational message of life, love, and hope that will encourage all viewers to never give up!”