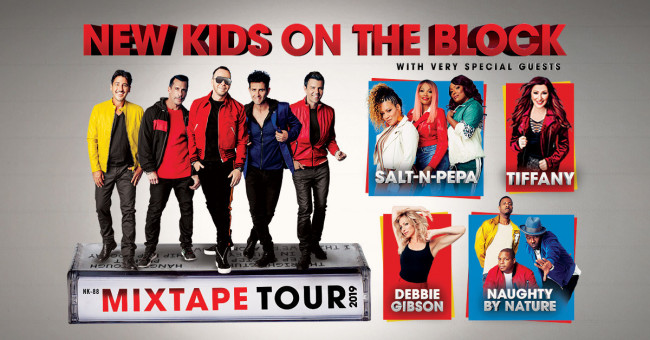 NKOTB appeared on the “Today Show” to reveal The MixTape Tour with very special guests Salt-N-Pepa, Tiffany, Debbie Gibson, and Naughty by Nature. The five iconic pop and hip-hop acts will hit the road together for the first time ever on a 53-city tour across North America next summer, which includes a stop at Hersheypark Stadium in Hershey on Saturday, July 6, 2019 at 7:30 p.m., as well as the Wells Fargo Center in Philadelphia on Thursday, June 27; the Nassau Veterans Memorial Coliseum in Uniondale, New York on Sunday, June 30; the Prudential Center in Newark, New Jersey on Tuesday, July 2; and the Borgata Hotel Casino & Spa in Atlantic City, New Jersey on Friday, July 5.

To celebrate the event, New Kids on the Block surprised fans by dropping a throwback track, “80s Baby,” featuring their new touring partners Salt-N-Pepa, Naughty by Nature, Debbie Gibson, and Tiffany. The track and its lyric video (seen below) takes listeners on a nostalgic yet refreshingly modern and fun ride through 1980s song references and fresh verses – just a small glimpse into the party that will be The MixTape Tour.

With over 100 million combined records sold worldwide, NKOTB, Salt-N-Pepa, Naughty by Nature, Tiffany, and Debbie Gibson will fill arenas with hit after hit when they take to the stage next summer. Always upping the ante, NKOTB have packaged the ultimate lineup for a once-in-a-lifetime live show experience. The group will return to the stage after 2018’s touring hiatus to perform fan-favorite No. 1 hits like “Hangin’ Tough,” “I’ll Be Loving You (Forever),” and “Step by Step.” When their tourmates hit the stage, they bring with them top chart hits and legendary catalogs to keep fans out of their seats all night. The tour is sure to be one of the can’t miss events of the summer featuring an unforgettable night full of smashes spanning across generations.

NKOTB made the announcement on the heels of their sold-out Apollo Theater show celebrating the 30th anniversary of their hit-packed breakout album “Hangin’ Tough.” The special one-night-only engagement sold out within minutes and saw NKOTB gracing Harlem’s famed Apollo stage for the first time since they debuted “Please Don’t Go Girl” at the Apollo’s notoriously tough amateur night. The career-defining album “Hangin’ Tough” produced hits like “Please Don’t Go Girl,” “You Got It (The Right Stuff),” “I’ll Be Loving You (Forever),” and “Cover Girl.” The crowd erupted when the band confirmed on stage that “Hangin’ Tough” will get a special anniversary reissue in early 2019 with new, never-before-released music.

Produced by Live Nation, The MixTape Tour will embark on its three-month journey beginning on May 2 in Cincinnati, Ohio and making stops in Nashville, Dallas, Los Angeles, Atlanta, and more before wrapping on July 14 in Hollywood, Florida.