It was announced today that Scranton alternative radio station Alt 92.1 will present its second annual Snow Show, featuring Young the Giant along with grandson, The Interrupters, and The Nude Party, at the F.M. Kirby Center in Wilkes-Barre on Sunday, Jan. 27, 2019 at 7 p.m.

Alt 92.1 will also hold a pre-sale on ticketmaster.com on Oct. 24 starting at 10 a.m. with the password “SNOW.” Listen to the station all week to win free tickets.

Young the Giant first broke through with their 2010 self-titled debut album, which featured the RIAA gold-certified hits “My Body” and “Cough Syrup.” This was followed by the release of 2014’s “Mind Over Matter,” which was both a commercial and critical success and prompted the New York Times to call lead singer Sameer Gadhia “one of the great contemporary rock voices.”

Since then, the California alt rock band has toured the world, with their most recent route featuring sold-out performances at Radio City Music Hall, the Greek Theatre, and the Aragon Ballroom. They have become a festival mainstay at high profile outings such as Bonnaroo, Austin City Limits, Lollapalooza, Outside Lands, and Governor’s Ball, among others. Over the course of their career, Young the Giant has charted five singles on the Billboard Alternative Top 10.

Their new album, “Mirror Master,” was released earlier this month.

Grandson is a 23-year-old alternative artist hailing from Canada. Born in the small town of Englewood, New Jersey, he relocated to the cultural melting pot of Toronto at a young age and grew up surrounded by music ranging from jazz to rock and roll to rap, dancehall, and R&B.

Grandson’s EP “A Modern Tragedy, Vol. 1” was released to critical acclaim in 2018, with the single “Blood // Water” entering into the Top 20 on both the rock and alternative charts.

The Interrupters are a Los Angeles ska punk band led by the unmistakable voice of lead singer Aimee Allen. The band’s third studio album “Fight the Good Fight” has crossed over onto the mainstream alternative charts. The album’s single “She’s Kerosene” peaked at No. 9 on the Billboard charts, with the album reaching No. 2 on the Billboard Independent Albums list. In all, The Interrupters have released three studio albums on Hellcat/Epitaph Records.

The Nude Party congealed as one unit in the southern mountain town of Boone, North Carolina in 2013 and gained their namesake very literally. Bonded by isolation, house party debauchery, a religion based on pushing the limits of bad taste, and a precocious predisposition towards The Kinks, The Animals, and The Velvets, they have burgeoned into a rock and roll act to be reckoned with.

The band’s self-titled debut album has been turning heads throughout the music industry. American Songwriter magazine points out that The Nude Party “blow the roof off but do it with style and class, nodding to the past without lavishly imitating it.” They played at Karl Hall in Wilkes-Barre last month. 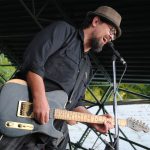