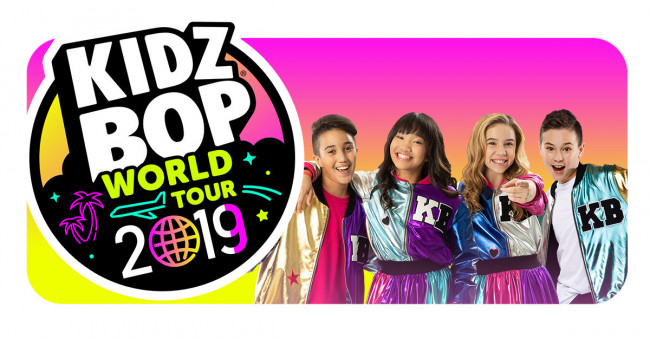 Kidz Bop, the No. 1 music brand for young kids, and Live Nation have announced the global expansion of the Kidz Bop live tour phenomenon with the launch of an all-new show next year – Kidz Bop World Tour 2019. The Kidz Bop Kids will perform in Australia, Germany, London, Mexico, and more, in addition to playing to 50+ cities across the United States and Canada.

The chart-topping brand’s first-ever world tour will stop at The Pavilion at Montage Mountain in Scranton on Friday, July 5 at 7 p.m.

The announcement comes on the heels of Kidz Bop’s 2018 tour – its most successful tour in franchise history – where the Kidz Bop Kids played to hundreds of thousands of kids and families across North America.

For families who want to make a day of it, the adjacent Montage Mountain Waterpark is offering a Splash & Sing Bundle that includes a one-day pass to the water park and one reserved ticket to Kidz Bop, which is also available at livenation.com.

Citi is the official pre-sale credit card for the tour. As such, Citi cardmembers have access to purchase U.S. pre-sale tickets, which are available beginning Tuesday, Dec. 11 at 10 a.m. until Thursday, Dec. 13 at 10 p.m. through Citi’s Private Pass program.

Additional fan pre-sales will run throughout the week, including offers for past Kidz Bop ticket purchasers. Special VIP packages, which include a private party, exclusive merchandise, and a meet-and-greet with the Kidz Bop Kids, will also be available. Artist Group International (AGI) is representing the Kidz Bop tour, and Subway Fresh Fit for Kids is an official partner of the 2019 tour in North America.

The Kidz Bop Kids, Billboard Magazine’s “No. 1 Kids’ Artist” for eight consecutive years, will kick off their World Tour in Australia during a special televised performance in January. The U.S. Kidz Bop Kids will then join the British Kidz Bop Kids to perform their first headlining show in the U.K. at the Eventim Apollo, Hammersmith on April 20.

The brand new show is an interactive experience for the whole family. The Kidz Bop Kids will be performing some of today’s biggest hits with engaging new set design, exciting choreography, and more. Additional tour dates to be announced in early 2019.

Victor Zaraya, President of Kidz Bop, adds, “Over the past five years, we have established Kidz Bop tours as an annual must-see live concert event for families, playing to sold-out crowds in some of America’s most iconic venues from coast to coast. This year, we are excited to expand internationally to create first concert experiences and lifelong memories for kids worldwide.”

Kidz Bop, which features today’s biggest hits “sung by kids for kids,” connects with children and families through its bestselling albums, music videos, consumer products, and live tours. Kidz Bop, a Concord Music Company, has sold over 20 million albums and generated over 2.7 billion streams since the family-friendly music brand debuted in 2001. The series has had 24 Top 10 debuts on the Billboard 200 Chart; only three artists in history – The Beatles, The Rolling Stones, and Barbra Streisand – have had more Top 10 albums.