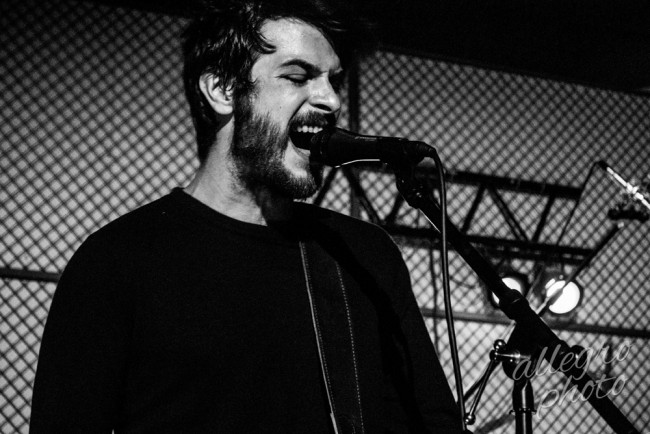 Scranton singer/songwriter Edward Cuozzo works quickly, though you wouldn’t know it by the quality of his work.

Over the course of 11 days, from Jan. 12-22, he completed “The Silvia EP,” a six-track acoustic album he recorded at home while working on his full-length record at JL Studios in Olyphant, and now NEPA Scene has the exclusive premiere.

Mastered by Joe Loftus at JL Studios, four of the tracks are brand new songs written during those 11 days, while “1991” and “Alleviation” were songs for his previous band, A Social State, “that never really panned out and seemed to fit the mood I was trying to set with this EP.”

“For the longest time I’ve had this Digital Portastudio that my fiancé bought me, but I didn’t really mess with it too much. I didn’t realize just how much I could do with it until I started reading reviews and watching tutorials on it. I found an old SM-57 microphone that I had lying around and I just started recording for fun, overdubbing guitars and vocals – it reminded me a lot of when I was 15, messing with a four-track cassette recorder and making up songs on the spot,” Cuozzo told NEPA Scene.

“So, I was basically just fucking around and accidentally wrote the first track on the EP, ‘Run Down Motels.’ I was simply inspired by the idea that I could record whatever I wanted to, however I wanted to, and I loved the sound I was getting – very raw, but clear, and it immediately felt super intimate. When I finished mixing “Run Down Motels,” I just kind of decided I was going to write and record an acoustic EP in as little time as possible. No overthinking anything, no super polished production – just six songs, super stripped down, and emotional.”

It can be streamed or downloaded for free via Bandcamp, or fans can name their own price if they wish to support him:

The EP is named after his grandmother, Silvia Cuozzo, who passed away last year.

“I’d like to think that maybe she would have enjoyed hearing my songs like this,” he said.

“The full length I’ve been working on will be 100 percent different than this. It’s a full production, with drums, bass, keys, vocals, etc. All different songs, too – some super aggressive, some super shoegaze stuff. It’s going to be a mixed bag stylistically. Nothing like this EP, though.”

Without giving away too much regarding what the songs are about on “The Silvia EP,” Cuozzo noted that its major themes include “love, friendships, mourning, and anxiety,” and the writing process differed from his time with A Social State.

“In A Social State, I would write a skeleton of song, almost like ‘Run Down Motels,’ finish it from beginning to end, and then bring it in to the guys. We would all then dissect it to its core and really find out which parts were the best, and which parts were negatively affecting the song. I love that process, but it’s a much slower process,” he explained.

“With my solo material, I’m following my gut instincts on what direction these songs should move in and trying my best to not let anything slow down my output of material. I just write, record, move on, and then later review the material I’ve compiled. So far, it’s been incredibly rewarding doing it this way, but I’d be lying if I said I didn’t miss making music with A Social State.”

“1991 (Too Close to the Fire)” is one track that stands out to him specifically.

“I love the lyrics and the mood of this one in particular. It pretty much encompasses my feelings about ‘making it’ in music.”

Cuozzo’s full studio album is slated for release in April, though, knowing him and his creative enthusiasm, it may be sooner than that.