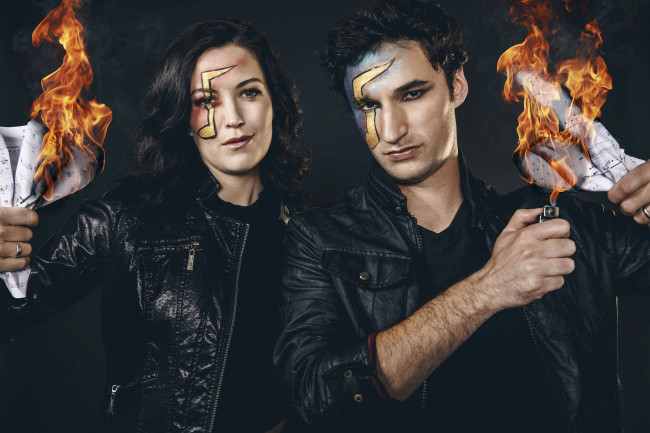 Comedy Central’s Astronomy Club and comedy duo Zach Reino and Jessica McKenna of “Off Book: The Improvised Musical Podcast” will headline the sixth annual SteelStacks Improv Comedy Festival at the ArtsQuest Center at SteelStacks in Bethlehem on Friday, Jan. 25 from 6 p.m.-midnight and Saturday, Jan. 26 from 11 a.m.-2 a.m.

On Jan. 26 at 9:30 p.m., the ArtsQuest Center (101 Founders Way, Bethlehem) welcomes “Off Book: The Improvised Musical Podcast” with Zach Reino and Jessica McKenna. Every week, McKenna and Reino sit down and record a completely improvised musical to combat the notion that musicals should be “carefully crafted” or “thought out at all.” Join them at the festival for a live performance of their show accompanied by Scott Passarella on keyboard and produced by Earwolf. Hailed by The AV Club as “awe-inspiring and totally delightful,” the duo’s podcast has been praised by various online publications, including Indie Wire, USA Today, Parade, Splitsider, and more. Live performances of the Los Angeles-based podcast include the renowned Just For Laughs Comedy Festival in Montreal, Seattle’s Bumbershoot Festival, and Comedy Central’s Clusterfest Festival in San Francisco. Reino and McKenna are better known as the musical sketch duo The Zach and The Jess. They’ve written musical sketches for Party Over Here, Buzzfeed, Funny or Die, Nickelodeon, and created and starred in “Serious Music,” a digital series for ABC.

In addition to the headlining performances, the improv festival will showcase improv groups from New York City; Philadelphia; Washington, D.C.; Austin; Baltimore; and San Francisco, as well as 15 teams from the Lehigh Valley.

Among the many highlights are The Code Switch, an improv “exploring how we communicate” performed by an all-person of color group; DMXX, an all-female hip-hop troupe; and a ¿Que?, a team of all Spanish speaking improvisers, except for one who attempts to figure out what’s going on. See the complete schedule of performances below.