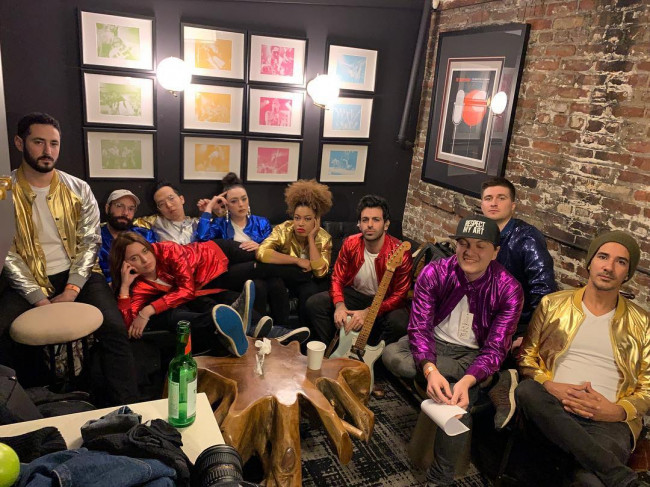 Scary Pockets, a Los Angeles band known for their viral videos featuring funky takes on popular songs, will jam at Stage West in Scranton on Wednesday, April 10. Among its members is keyboardist Jack Conte, a singer/songwriter who is also the CEO and co-founder of crowdfunding platform Patreon.

Wilkes-Barre’s own funk band Jordan Ramirez & the Tribe will open the 21+ show.

Doors at Stage West (301 N. Main Ave., Scranton) open at 6 p.m., and the concert starts at 8 p.m. Tickets, which are $18 in advance, are on sale now and can be purchased via Prekindle. There is currently an online flash sale running on tickets; use promo code “FLASH” for $5 off.

A “pocket” is “when music is rhythmically in a groove, the ‘lock’ between members of a rhythm section when playing well together.”

There’s a new funk group hitting the scene, and they’re playing all the hits to make you reminisce. Jack Conte – co-founder of Patreon and the band Pomplamoose – teams up with his high school buddy Ryan Lerman – guitarist and musical director for the likes of Michael Bublé, John Legend, and Ben Folds, among others – to bring music fans pockets that are scary.

What started as a group of friends just wanting to get together to jam out has turned into a full-on collective of talented musicians looking to reimagine world-renowned hits into funky facsimiles that have audiences on their feet. Scary Pockets has taken over the Internet with their groovy takes on AC/DC’s “You Shook Me All Night Long,” Guns N’ Roses’ “Sweet Child O’ Mine,” and much more, collaborating with Larry Goldings, Casey Abrams, India Carney, James Gadson, Cary Brothers, Peter Hollens, Darren Criss, Charles Jones, Julia Nunes, Kenton Chen, Judith Hill, Bruno Major, Reeve Carney, Theo Katzman, and dozens of other artists and musicians to produce funk interpretations of familiar tunes every week.

In their first year as a band, Scary Pockets garnered 9.5 million views, 189,000 likes, 123,000 shares, 31 videos with over 100,000 views, and one video that broke a million views. 18 months after their first session, they released over 90 videos that have been watched over 31 million times on YouTube for over 65 million minutes.

“When we started Scary Pockets, we had no idea that it would get this much momentum in our first year, but it’s really growing into something special, and even more exciting, there’s a real community forming around the project,” Conte said.

“We released ‘Creep,’ our Radiohead cover with India Carney singing lead, and everything changed. The video got over 10 million views on Facebook within a few days, and now it has over a million views on YouTube. That set Scary Pockets on a new trajectory, and we suddenly started reaching a huge community. … Our first year as a band has been insane! The community and reception has been a dream.”